Boobs: YOU'RE DOING IT WRONG (Taki)

Sometimes it's easier to show what's wrong with an image by drawing directly over it, so that's what I'm doing today. (Every once in a while, my degree in Fine Arts does serve a practical purpose...)

I know I've been picking on Soul Calibur IV a lot. I promise I'll move onto other targets, but for the purposes of what I'm doing here the freakish anatomy of the Soul Calibur IV women helps me make a point a bit better.

Okay, so today I'm going to pick on Taki, the boobtacular spandex ninja: 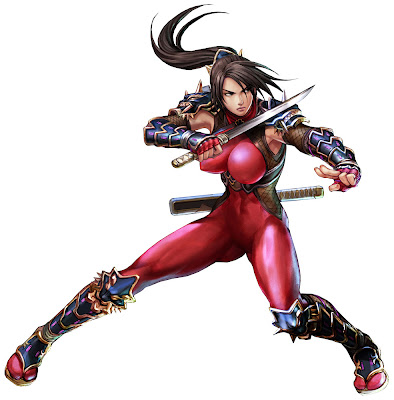 Her boobs in addition to being unnaturally huge are also POINTY, which is just kind of freaky. There must be some serious architecture to that spandex suit that we don't know about, because... yeah. Boobs don't do that. So let's go in there and do a little correcting... 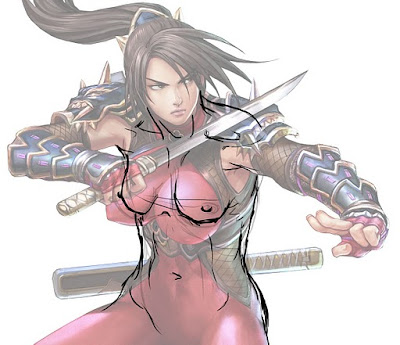 Now, I didn't make Taki small-chested by any stretch of the imagination - she's still rocking somwehere between a C and a D cup. See the difference there? But check this out -In the designer's quest to make Taki a walking fetish, they've turned Taki into something actually not human: 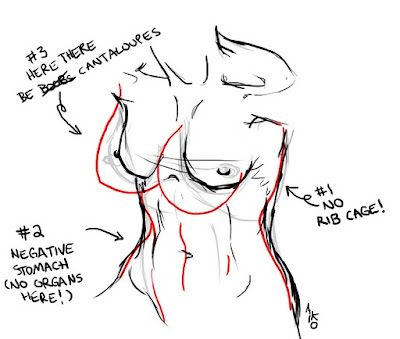 The red lines are how Taki was drawn, and the black are my corrections. When you compare the two, you can see that they've given Taki so much of an "hourglass figure" that her rib cage is practically inverting itself, as is her stomach. This begs the question, where does she keep her organs? Also, you'll notice that I fleshed out Taki's ass a bit. That's not me making Taki a bit fatter, that's me giving Taki the musculature needed to connect her legs to her torso.

Considered from this angle, this makes the Soul Calibur IV women even more disturbing. Namco has gone from fanservice-y idealized women to women that are demonstrably not human. Considering that the Soul Calibur series is aimed mostly at young men, should we be surprised if the segments of the target audience partially internalizes some of these attitudes, even if only to a small degree?
Posted by wundergeek at 7:26 AM