With the noteable exception of Princess Peach, Nintendo has been doing better than Sony and Microsoft in terms of positive depictions of women in its video games. The female characters in Super Smash Brothers kick just as much ass as the males, and with the Wii Nintendo has largely steered clear of the jiggle-tastic fighting game series that have proliferated on the PS3 and Xbox360. (Mostly. I'm looking at you, Mortal Kombat: Armageddon.) And of course, Nintendo had one of the first female hero characters ever, the unbelievably bad-ass Samus Aran of Metroid series fame.

Of course, what most people know Samus for is her assortment of cannons and the bulky power armor. There's been a lot of suits over the years, but they've all been large, bulky, and powerful-looking: 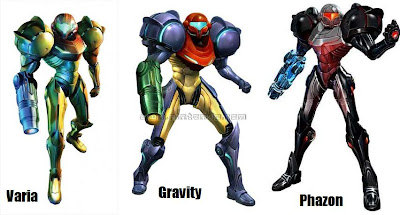 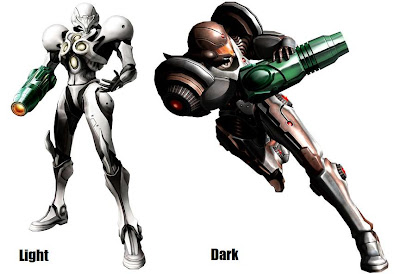 Now I'll admit that I haven't played any of the Metroid games after the original GameBoy games (My first console was a PlayStation and I've stuck with Sony since), so I'm a little fuzzy on the chronology of which suit came when. But I can definitely say that I love, love, love these suits. Samus started out as a total badass and has continued to be a total badass.

Except then they created the "Zero Suit" - a much less powerful spandex version of Samus' suit. Gone is the badass armor, gone is the huge cannon. They replaced the Samus that I love with some blonde bimbo with a handgun: 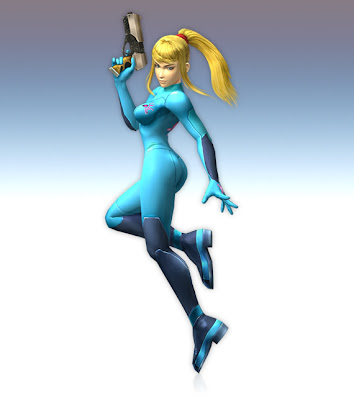 Now, that's not to say that there aren't guys who were unhappy with the re-design. But for every guy who complained that he wanted his power-suited Samus back, it seemed like there were twenty more who welcomed the new Zero Suit Samus with open... um... arms. And they're all too eager to dogpile on people who complain about the new Samus with gems like:

dont be mad shes not a frumpy carpet muncher

i really don't like the idea, but she's hot man.. and i hope that playing with no suit will be an extra o something like that.

Please, stay off the internet for the rest of your life.

lol, youre a fag.

And now, of course, the damage has been done. According to Wikipedia, the Zero Suit was introduced in 2008, but it seems to have come to dominate the popular representations of Samus, despite that the Zero Suit was never a total replacement, just a new option. If you search for "Samus Aran" on Google Image search, 15 out of 44 images on the first two pages are of the Zero Suited Samus - some very NSFW. So despite that there are seven suits to choose from, if you include the Fusion Suit that only appeared in one game, the Zero Suit accounts for 34% of the results on the first two pages - definitely a disproportionate representation.

(An interesting side note, though I'm honestly not sure if this signifies anything, is that despite the fact that the helmet is one of the most distinctive features of her power suits besides the cannon and the large shoulders, only 16 of 44 images on the first two pages show Samus actually wearing the helmet. Almost two thirds, 63% show Samus without her helmet on. Not sure if that's good or bad.)

None of these images depict Samus as anything other than a sex object, and none of them show the toughness that made Samus such a popular character in the first place - which is hugely disappointing. There are so few really good female characters that have their own franchises, so it's really disheartening to see Nintendo give in to the Sex Sells Marketing Machine after around two decades of a Samus who in no uncertain terms could feed you your spleen on a plate if she felt like it.

Now, if you'll excuse me, I'm going to go soak my eyeballs in Lysol. Srsly. Yuck.
Posted by wundergeek at 8:34 AM