Jiggle Physics Has Not Been Good For Fighting Games

Back in the dark ages when dinosaurs roamed the earth, I had a huge addiction to Soul Edge for the PlayStation 1, which later became the Soul Calibur series. I played the subsequent games - Soul Calibur 1 and Soul Calibur 2 as well. And sure there was fanservice - what fighting game didn't have fanservice?

Okay, so sure in Soul Calibur 2 Sophitia and Cassandra's skirts flipped up into panty shots when they moved. Whatever. The thing I love, love, love about Soul Calibur is that the gameplay is actually affected by a character's chosen weapon style. I took enough tai chi to appreciate how Xiang Hua's sword technique works, and I enjoy playing Seung Mina and Kilik since they use staff techniques that I learned in tae kwon do. The various martial traditions appeal to the martial arts geek in me. 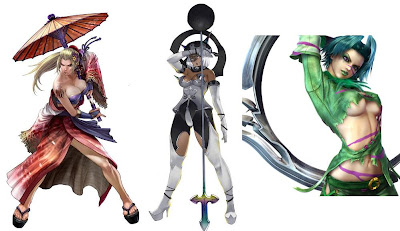 (From left to right: Setsuka, Angol, and Tira) All of these characters have pretty ridiculous character designs. How exactly am I supposed to find a woman with an umbrella and platform flipflops intimidating? With those breasts and those shoes, she looks like she's about to fall on her face. And what about Angol? What the hell is with the crotch floss and the stripper boots? And Tira's costume can't even be called a costume, really. It's just a few pieces of torn fabric.

So all of these are pretty bad. But what makes all of this worse is when you compare pictures of existing characters from Soul Calibur 2 and Soul Calibur 4... 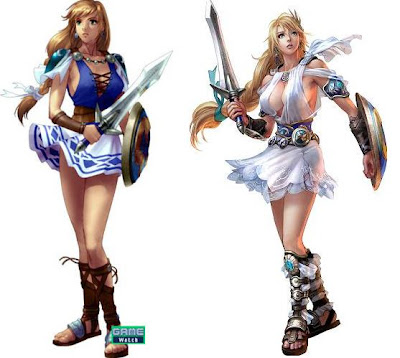 So on the left, we have Sophitia from Soul Calibur 2. And yes the costume is ridiculous. She's going to prance around in that ridiculous top with no bra and just a few pieces of string holding her in? And the built-in panty-shot physics? But as ridiculous as the Sophitia from Soul Calibur 2 is, she is still within the realm is what physically possible in a human being without surgery. She'd be a genetic lotto win, but it could still be possible.

Compare that with the Sophitia on the right from Soul Calibur 4. We've gone from "extremely improbably but still possible" to absolute abomination. Her breasts are twice as large as her head, for Christ's sake! 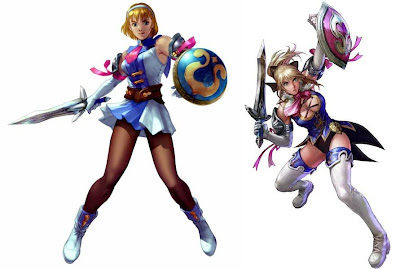 We see pretty much the same thing with Cassandra in terms of proportions, but her costume has also gotten much worse as well. In the space of two games, she's gone from supermodel in a short skirt to a total freakshow. The skirt is gone, there's a giant cleavage-hole, and her boots have gone from ankle boots to stripper boots. And as awful as these transformations are, Sophitia and Cassandra weren't even "sexy characters"!

(I wasn't able to find anything showing all of Seung Mina's costume from Soul Calibur 2.) Is the economy that bad in the Soul Calibur world that none of these women can afford to entirely cover their breasts? Do they use cloth as currency? Because what's with this costume? This is just awful, especially since Seung Mina is one of my favorite characters. But this still isn't as horrific as... 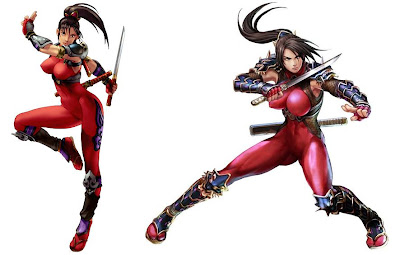 Taki is one of "the sexy characters". The body paint outfit was introduced in Soul Calibur 2. Taki's proportions on the left are definitely problematic, but the Taki on the right is just cartoonish. What woman has boobs that pointy? They're like bazookas attached to her chest - and just look at the camel toe! I imagine she winds up pulling spandex out of her crotch after every fight. 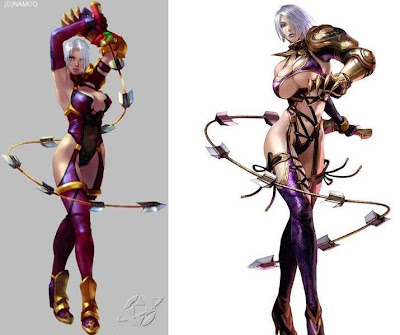 The really sad part is that it didn't have to be this way. Check this out: 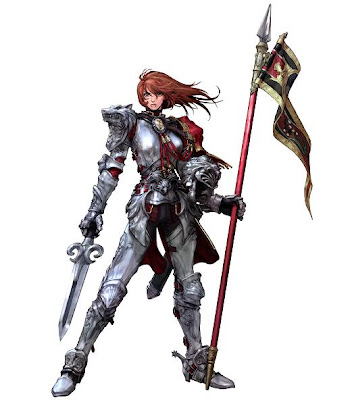 This is one of the new characters, named Hilde, and she's awesome! The armor, the expression - they're fantastic! She kicks all kinds of ass! Why couldn't they have designed more female characters like Hilde? Why stuff the game full of walking freak shows? I really wish I could understand the decision making process here. If any of these women were real, they'd look like Maxi Mounds. They certainly wouldn't be able to swing a weapon, much less fight effectively.

It's disgusting, and it's disappointing. As much as I love the gameplay of the Soul Calibur series, I'm certainly not about to buy any future games in the series. And I certainly hope that gamer men aren't as shallow as Namco's marketing department seems to think they are.
Posted by wundergeek at 4:17 PM