So it has to be said that Wizards has made strides in improving how women are portrayed in 4th Edition D&D. It's certainly a lot easier to find images of women who are both fully clothed and active. You also see a lot more pictures of women as fighters, where in the past any woman in armor was by default a cleric. Furthermore, I've been quite pleased by some of the images I've seen of strong, competent, not sexualized women.

The problem is that Wizards seems to want to have their cake and eat it too. It seems like for every fantastic image I see, there's somewhere between one and two really awful ones. What's worse, when you see women on the covers of 4E books they're almost always cheesecake women and not the positive strong women I just mentioned. (Case in point: The Adventurer's Vault 2, Dungeon Delve, The DMG 2, The PHB, The PHB 2, The PHB 3, and too many others to count.)

So I thought I'd do a little side-by-side comparison of some really great pictures of 4E women right next to some really awful ones. These are images that I found in two threads (good art, bad art) in the Astrid's Parlor forum on the Wizards site. As such, I don't own the rights to any of this. See the end of this post for the cover-my-ass boilerplate.

(Noteably, unlike my last post, there are larger versions you can click through to of the below for more detail.) First up we have: 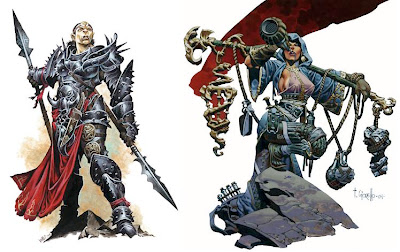 So here we have a comparison of different approaches to the badass pose with weapon. The woman on the left really does look badass. Those weapons are most definitely not for show. (Incidentally, this is one of the few images by Wayne Reynolds that I found that WASN'T guilty of egregious cheesecake. Maybe he got tired of all those uncovered boobs.) The woman on the right - what is she doing? Getting drunk? That would explain her complete lack of caring about the sideboob. I know which one of these two women I'd rather take on. 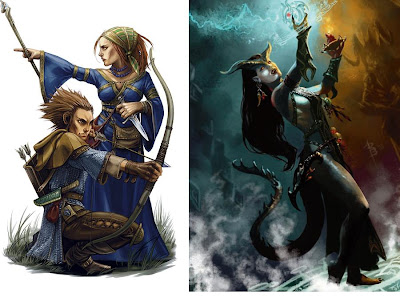 So D&D is purported to be loosely based on medieval Europe. The wizard on the left is a good example of that, with her costume looking pretty similar to stuff you might see in that period. The woman on the right, however, appears to be wearing absolutely nothing to cover her backside - which I'm pretty sure isn't in keeping with the feel of medieval Europe. Last time I checked, Europe gets pretty cold and, dude, a tail is not a replacement for pants.

I'll also note that despite the fact that the tiefling is actually casting a spell and "controlling the elements" or whatever, I find the halfling far more imposing. I love the "don't fuck with me" expression on her face. 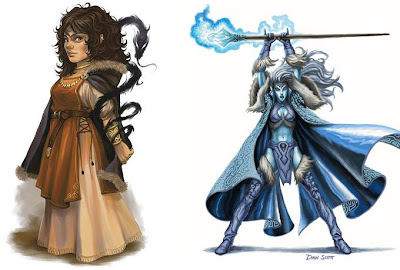 Another contrast in spell casters, here. Overall, the art for the female dwarves has been pretty fantastic and positive in 4E, and the mage on the left lives up to that standard. The pose is pretty neutral, but the shadow-serpent and the expression on her face make her someone not to be dismissed lightly. And sure, the mage on the right has a more active pose - but she's pretty obviously posed that way so as to display her, uh, attributes to their maximum advantage.

Also, the anatomy is problematic on the slutty-mage - she's suffering from a pretty serious case of sphere-boob. She also doesn't seem to have any hips, which is kind of bewildering. Maybe the only difference between the sexes for elves is that women are just men with boobs tacked on? 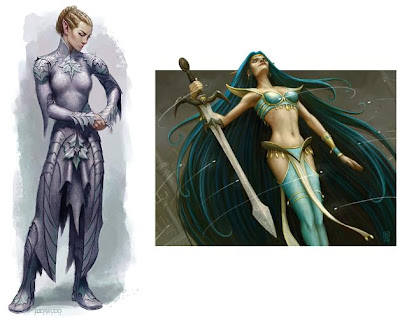 These are, unfortunately, both depictions of female fighters. Don't ask me how the chick on the right is supposed to fight in that getup. I'm sure she spent a much longer time getting her hair to do that than getting into that "armor". The sad thing about this is that the woman on the left is both powerful and feminine. The chainmail she's wearing is clearly serving a function and actually covers all the stuff you'd want to protect when hacking at people with swords. And, personally, I find the woman on the left a lot sexier than the freak show on the right. 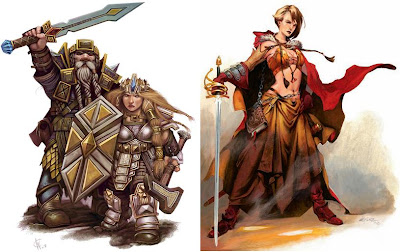 What to wear when hacking at people with swords: Part Two. Again, fantastic female dwarf. Again, I love, love, LOVE the "don't fuck with me" expression. Whereas the woman on the right is wearing a tube-top held together with a few pieces of string. Here's the deal, guys. I'm approximately that well endowed, and there's no way in hell I'd trust that top to keep the girls contained. Also, what's with the visible thong? Did medieval Europe have Victoria's Secret? Lastly, look at the poses. The dwarf looks like she's two seconds from smashing your face in with that giant hammer. The human just looks like she's posing for a glamour shot. 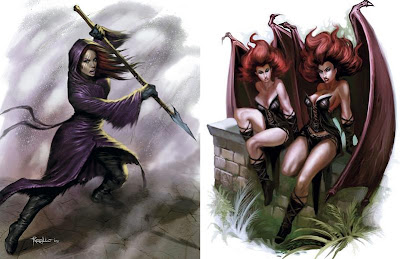 Okay, we're going to end with how to portray threatening women. The woman on the left is strong and competent. She's not just swinging the spear around for show. Whereas the women on the right... Okay, okay, yes they're succubi. They're "supposed" to be sexy. But succubi are demons, for crying out loud! Practically immortal beings from another plane that are supposed to eat men for breakfast! These women don't look like they've eaten anything more than a lettuce leaf for breakfast.

Furthermore, they're in these awful "look at me, I'm so sexy" poses, but the anatomy is so distorted that I have a hard time seeing them that way. Their waists and shoulders are both way too small. Plus, you know, the boobs. Again, guys - BOOBS DON'T WORK THAT WAY. Christ, the succubus on the right practically has a shelf. I'm surprised she doesn't carry stuff around on that thing.

So, yes. D&D is making strides, but they're no Paizo. (Not that Paizo is perfect either.) And when you consider how many of their covers have cheesecake, it makes me wonder if they have any real intention of improving their depictions of women past this point.

[Oh yeah, the boiler plate. This blog is not affiliated with, endorsed, sponsored, or specifically approved by Wizards of the Coast LLC. Wizards owns everything, I own nothing. For more information about the products these are taken from, go to the Wizards website.]
Posted by wundergeek at 10:30 AM