I realize that it might make more sense to start off with Evony, since Evony has far and away the most sexist game ads I have ever seen. I might still tackle Evony down the line, but it's been pretty well documented, so instead I decided to start with Rappelz. It was actually Rappelz ads that got me to start my collection of awful game ads, so it seems only fitting that Rappelz should get first crack at the hot seat.

Rappelz is a typical Korean MMO. It's published by Korean publisher Gala Labs and translated into English as well as many other different languages. In North America, it is distributed by gPotato, which also distributes several other K-MMOs. Rappelz is a "free to play" MMO, though I was unable to determine with casual surfing its funding model. (My guess is freemium, since that's how many free K-MMOs are funded.)

Anyhow, the ad that caught my eye first was this (apologies for the small size): 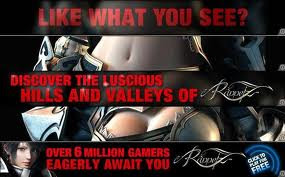 Wow. Way to keep it classy, Rappelz. A lot of free MMOs use questionable art, but you really took the effort to go the extra mile and be creepy as well as questionable. What is just as awful as the text, but not quite as obvious, is the size and placement of the face at the bottom. Look how small it is in relation to the boobs! But, you know, that makes sense since boobs don't do that pesky thing where they talk back. 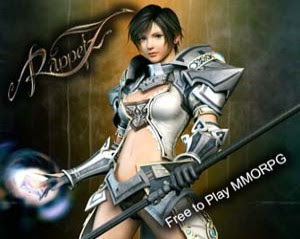 This one is marginally less terrible, in that way that Christina Aguilera is marginally less awful than Britney Spears. The armor is absolutely ridiculous - why bother putting that much protection on your shoulders if your going to leave your crotch, midriff, and boobs wide open? If I had to fight this chick, I'd stab her in the chest just on principle. Furthermore, check out the placement of the word "free". It's RIGHT NEXT TO HER CROTCH. Ugh. 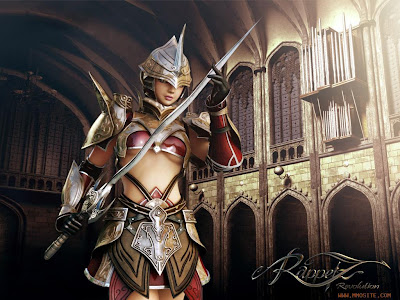 "Hey, look. I've got this sweet sword but - OH MY GOD I CAN'T SEE!" This one has all the ridiculousness of the last chainmail bikini (though at least her crotch is protected in this one), and adds the additional handicap of a completely useless helmet that covers her eyes. Also, if you'll look closely, you'll see underboob here. Now, I'm going to speak up as someone who actually has a 2nd dan in tae kwon do. It's pretty well impossible to fight effectively if your boobs are LITERALLY FALLING OUT of your top. 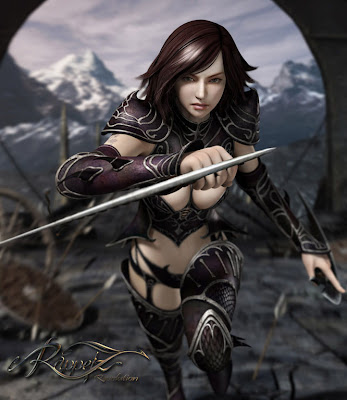 Oh my god! The cleavage is coming to kill me! This is a pretty good illustration of one of my pet peeves in game art - the spherical boob. News flash: Women's breasts are not spheres that are just kind of tacked on to our torso. Also, if your boobs are as big as your face, YOU HAVE PROBLEMS. 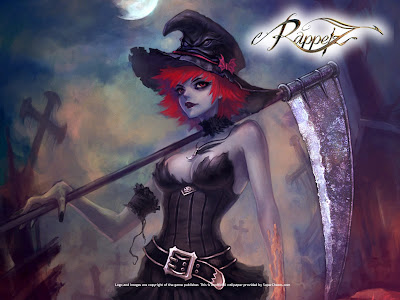 Okay, I'd be really nervous toting around something that large and sharp while half naked. 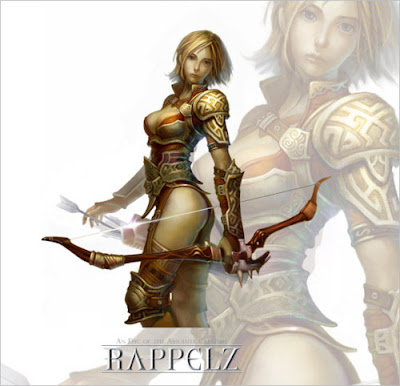 The boob spheres strike again! Plus we get a pretty fan-service-y panty shot here. I guess these Rappelz guys can't decide if they love the boobs or the crotch more.

All in all, pretty awful. I mean, sure the Rappelz women are wearing more than the Evony women. But let's face it, that's not all that hard.
Posted by wundergeek at 9:56 AM