[Edited: The images should work now]

A brief side note: Things are going to slow down quite a bit until after the holidays, due to the many and varied holiday celebrations that come with having a large family. I'll try to pop in and it least post some links, but things won't pick up again until after New Year. So go and have a good holiday and take a break from reading about headache-inducing sexism. The wundergeek commands you!

Another brief side note: Yes, yes I know that webcomics aren't games and that I'm "diluting my focus" by talking about them here. Whatever. Webcomics are still a bastion of geekery, so I view this is related.

And now, the ranting:
There are a lot of webcomics out there that rely on badly drawn boobs to try to draw traffic to their sites. And man, I get tired of badly drawn boobs. At least with game art, 95% of the time I get well-rendered disgusting boobage. I've been collecting banners that I've come across while keeping up with my favorite comics. Just as a "fun" little exercise, I made a little collage for your viewing enjoyment: 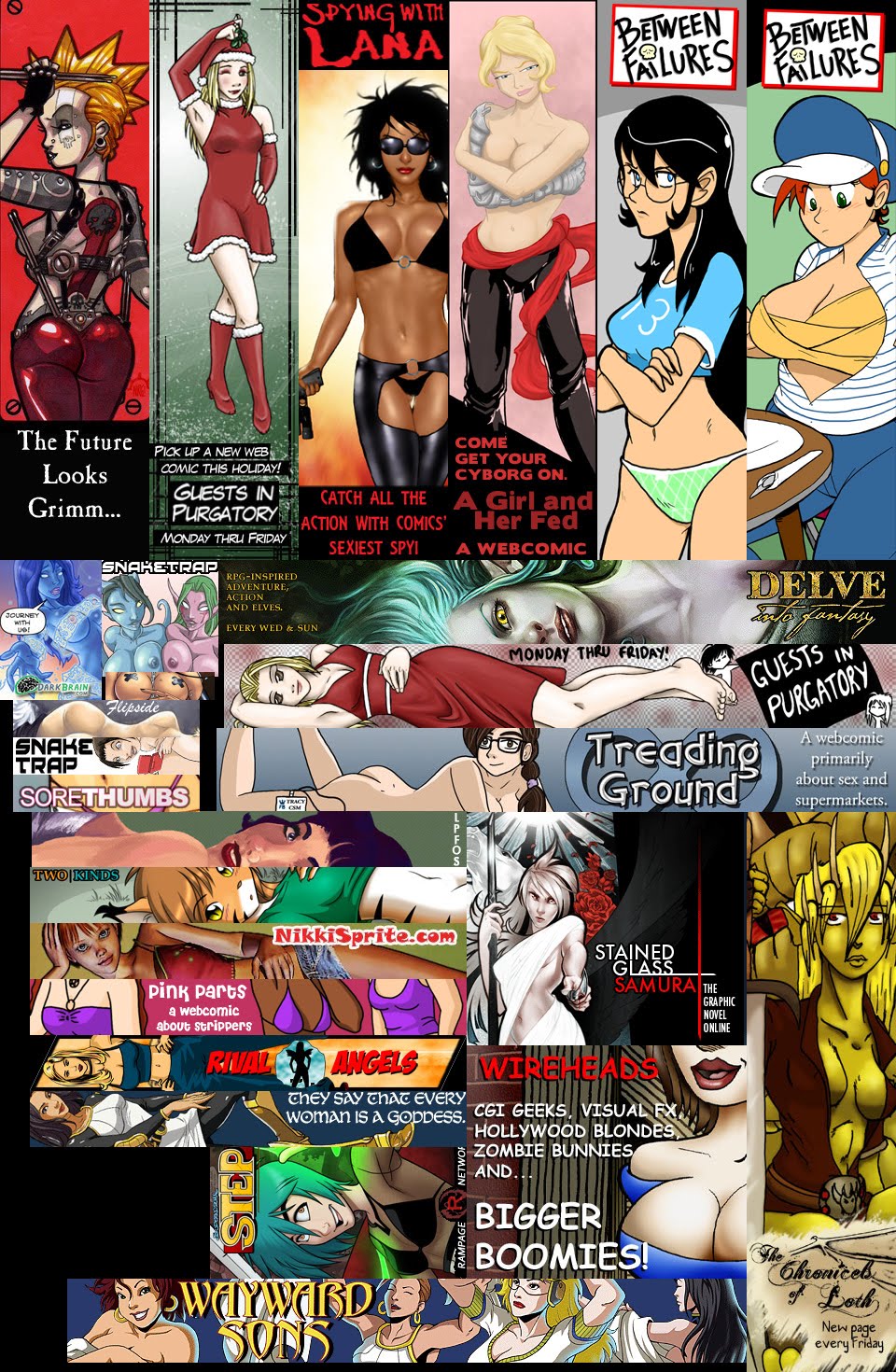 The discouraging part is that it only took me three or four weeks to collect all these, and I'm not in any way a huge webcomic addict. (Or at least, with "only" 9 comics that I follow on a regular basis I'm certainly not as huge a webcomic addict as some people out there.)

I get kind of the same feeling looking at this that I do sometimes when I'm walking around the Dealer's Room at GenCon, except with the added frustration that I want to make half of these guys take a f*cking anatomy lesson. Big fake breasts are one thing, but if you're going to have them in your comic then at least draw them CORRECTLY. I mean, some of the boobs in this collage are just horrific. (I'm looking at you, Wireheads.)

It's just frustrating, because I feel like I can't escape the legions of horribly drawn boobages (yes I'm making up words again) even when I'm reading my favorite comics! The comics I love have strong female heroes who are not any more sexualized than their male counterparts - so why should I have to put up with this invasion into my nice, sane comic space?

For those of you who'd like a snarkier take, I also did a second version of the collage with my comments overlaid. I won't post it here since it, too, is quite large. But you can find it here if you want my analysis of why these banners suck.
Posted by wundergeek at 9:55 AM