Now I'll take a moment to say that I have mixed feelings about cosplay. I get why people do it - I've even done a little myself (though, amusingly, as male characters). So lets be clear that I'm not out to demonize cosplayers. They make some seriously amazing costumes that I always enjoy seeing every year at GenCon. It's the creepy fetishizing of female cosplayers that I have a lot of problems with. It's bad enough when you see hordes of male nerds photographing female cosplayers at GenCon, and on the internet it gets even creepier.

For the most part I'm not going to post pictures because even just scratching the surface of what's out there, I found hundreds of photos. Instead, you'll mostly get links that are, of course, mostly nsfw. Youtube rules apply for comments (ie: don't read them) as well.

On to the awful!

Kotaku actually doesn't post regular cosplay pics, but they can't be left out of the fun, as evidenced by "The Top 50 Cosplay Cleavage Shots". The indicator that this is less than classy? (Okay, other than the title.) The first sentence of the feature is:

Right, because there's nothing gamer men like better than whipping it out and wanking to cosplay cleavage shots over their lunch break. *eyeroll*

Destructoid, however, has tons of cosplay features - so many that it even has its own feature category. Now, granted, some of the posts under this category are really awesome and not creepy cosplay, like the most amazing Samus I've ever seen. But then you see some of the other featured galleries that just have so... much... cleavage. *sigh*

GamesRadar has, in addition to regular cosplay features, a "Sexy Cosplay Gallery" full of fanservice-y shots of female cosplayers.

RipTen, too, has its own cosplay feature category. Scrolling down the page you see boobs... boobs... and more boobs. What's really great, though, is this one: "Jennifer Nigri loses Xbox and game collection in fire - booty goes unharmed". There's some cleavagey shots of Jennifer in a few costumes before the article mentions that she has been selling stickers to raise money to replace her game collection. The feature goes on to quote these as actual responses (emphasis mine, bracketed comments mine as well):

I wanna put my stickers on your naked body. Whoa my feet smell … [WTF???]

I would love to help out but I don’t think my fiancee would approve :( [That bitch!]

I’ll buy you both a PS3 AND a new XBox ($500) but I’m going to want more than the stickers… >;D [Right. Because really what's the difference between cosplay and prostitution, really? /sarcasm]

GossipGamers has its own cosplay category, which is of course full of wank-worthy cosplay pics. However, there are some pretty wtf-worthy features like: Hot R2D2 Girl with Taco Bell Dog and Samus Zero Bunny Suit (curse you, Nintendo! Curse yooooouuuuuuu!!!) - which interestingly is another feature of Jennifer Nigri.

1up.com actually doesn't have a cosplay category, but it still has plenty of cosplay articles like this one: "BlizzCon 2010 Cosplay Gallery: elves, swords, and a lot of body paint."

GameWad doesn't seem like a terribly active site (their last post was in September), but there are three cosplay galleries just on the front page. I just can't believe that they named their site "GameWad". However you think about it, it just sounds... unappealing.

GoFanBoy.com (another entry in the "why did they pick that name?" category) takes the cake for sheer volume of pornular cosplay pics with a staggering 42 feature cosplay galleries in 2010 alone. But perhaps the creepiest thing is this gem in the navigation sidebar: 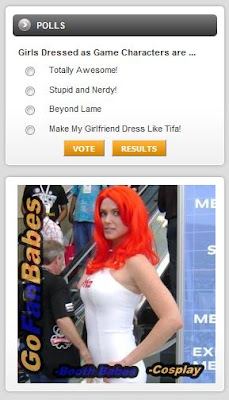 That button there sends you directly to the list of cosplay galleries. And, since you wouldn't want to get tired of the same pair of breasts, the image that comes up is random each time. Right above that we also have a super-creepy cosplay poll. "Make my girlfriend dress like Tifa" gives me the heebie jeebies for reasons I can't quite put into words.

These ladies give me a big Level Up. In my pants. Sexually.

With a little imagination, the picture on the right almost looks like a lesbian ninja make-out battle just WAITING to happen. Hmm. Lesbian ninjas.

Man, I wish I could show this picture to every fat, ugly cosplayer out there who's tried to ruin my Tifa fetishes and shame them into wearing burlap sacks for the rest of their lives.

Okay, please crawl into a hole and don't come out, like, ever. kthxbai
Posted by wundergeek at 9:22 AM