Paizo: Thanks for not being full of race fail, but...

do you think you could maybe be a little less full of gender fail?

[Preamble and Disclaimer: All of these can be seen at much higher resolution if you click the images. I recommend doing this. And as always, none of this is mine. All Pathfinder material is copyright Paizo. I don't own a thing.] 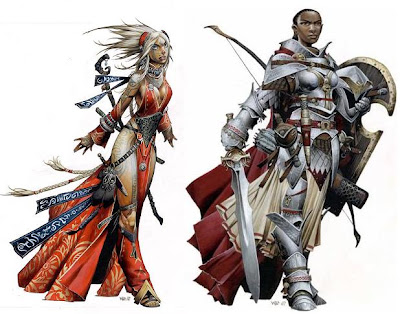 These pictures blew my mind, especially the picture of the paladin. Two completely kick-ass, non-white female characters! And okay, sure, the sorceress is a total slut-bag, whatever. But oh my god I loved the paladin so, so very much. This is what I wanted and never saw in my fantasy art! It made me so very happy to know that there was an RPG publisher out there whose head wasn't completely up its ass when it came to gender/race issues.

Now that's not to say that Paizo gets a total pass on the race front. Paizo is still guilty of race fail on occasion, like with the official photo promoting their 2010 GenCon costume contest. For the contest, they had a photo of someone costumed as Seoni, the aforementioned sorceress: 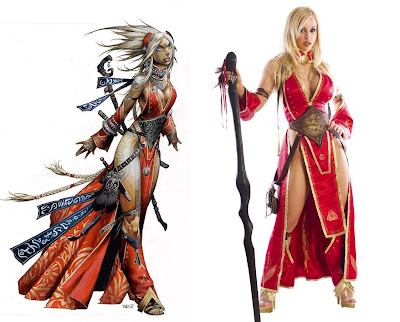 Sing it with me kids! One of these things is not like the other, one of these things just doesn't belong... I mean, come on guys. I'm sure it couldn't have been too hard to find a racially appropriate model to pose for this photo. It's not like white women have a monopoly on big fake breasts! And oh yeah, thanks for promoting your products at GenCon by encouraging women to dress up like cleavagey skanks. I mean, please. Wayne Reynolds really doesn't need more encouragement to draw shit like this.

Then again, as this photo taken by Sean K Reynolds shows, it's not like this is the first time that Paizo has used boobs at GenCon to sell their products: 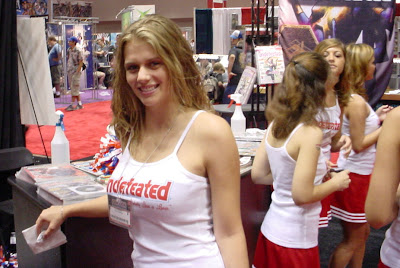 And the thing is, if it was Wizards or Blizzard or the like, I'd roll my eyes and call it par for the course. But it's doubly disappointing coming from you, Paizo considering your obvious attempts to not completely whitewash your settings. Why take so much time to balance your depictions of non-white characters if you're just going to make all of your female characters standard fantasy cheesecake?

When you go through the portraits that are posted on the official Paizo blog, you do see a very diverse mix of ethnicities. But for the most part the portraits of women are at least mildly problematic. To illustrate my point, I've compiled a bunch of their portraits - which I've rated on a scale of WTF to awesome: 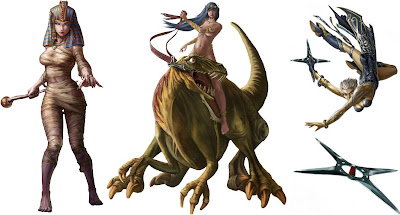 Okay. So first of all, mummies are not that hot. There's this thing that happens where all of the moisture is removed from their bodies, which is what makes them mummies in the first place. There is absolutely no way that a mummy would have breasts that perky, or such a curvaceous backside. Also, real mummies are wrapped in so many layers of cloth that there's no way they're just going to start walking around.

Then we have Naked Dinosaur Chick. And again, seriously, what are you thinking? We'll leave aside the question of why the dinosaur isn't trying to eat her and consider the problem of her nudity. There's a reason why women's bike shorts have a lot of crotchal padding. (Yes I'm inventing words. Shut up.) It's because bicycle seats can be painful for extended periods of time. I'm going to go out on a limb and say that having your crotch pretty much in direct contact with a dinosaur's spine has got to be way worse.

And flying chick... So many anatomical problems. Like her shoulder connecting directly to her ribs. Or her lack of a neck. Or an ass. If you're going to publish ridiculous cheesecake, at least get the basic anatomy right. 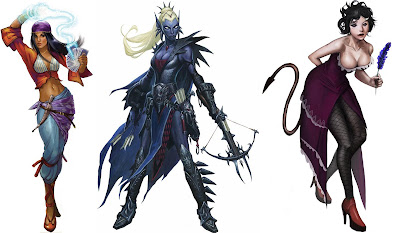 Hey look! Big fake boobs! At least the drow looks somewhat badass, which is more than can be said for the other two. I do have to give Wayne Reynolds props for that. His cheesecake women are at least never passive princesses waiting to be rescued. But it would be great if he could do NON-cheesecake badass women too. [Note: apparently the drow is by Steve Prescott, whoops! I'll stand by my comments about the art, and my comments about Wayne, but he didn't actually perpetrate this particular cheesecake indignity.]

Yawn. Cleavagey noble, check. Woman with cleavagey/disintegrated clothing, check. The "Persian Princess" on the right is actually disappointing because she comes SO CLOSE to being completely awesome. I love the costume, love the sword, love the jewelry, and love the fact that she actually looks Persian. So why, oh WHY the random cleavage? It's like running 4.75k in a 5k race, then deciding to quit and go to Tim Hortons for doughnuts. 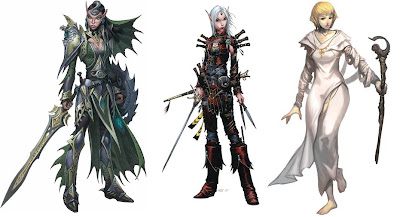 No surprise here, numbers one and two are Wayne again. Come on, Wayne! It's like he gets art direction asking for fully covered women and says to himself, "well, no one will notice if I stick in some cleavage". It's especially ridiculous on the woman in plate mail. Why go to all the effort of getting plate mail made if it doesn't protect from heart-stabs?? The woman on the right I included despite being fully covered because she's just... so... insipid. But that's a judgement call on my part, I guess. [Note: Number one was also miscredited and is actually by Steve Prescott. Though, again, I stand by my commentary on the art and my commentary on Wayne's art in general.] 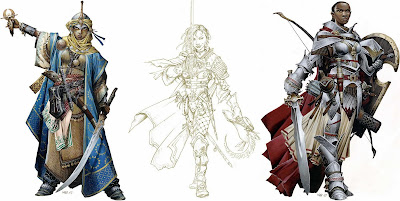 THIS! Oh my god, this! More of it! More of it, I say! THESE are the women I want to see in my roleplaying products. The cleric on the left is everything that the Persian Princess should have been! The duelist in the middle, I heart her so much! And Seela the paladin remains one of the best pieces of fantasy art I have seen ever! Yes I need this many exclamation points!

See, it's stuff like this that makes me delighted, makes me think that someone out there is listening to us! We're finally getting the strong, non-sexualized female avatars we've been asking for! But then you turn around and do shit like this for the holidays:


And that just makes me disappointed, because these are supposedly a "thank you" to your customers. I'm not a customer, but even if I was I wouldn't want to be thanked this way.

So I guess how I feel about Paizo is kind of like how I feel about Enterprise. There's just so much raw potential for awesomeness, but the reality just fails to deliver.
Posted by wundergeek at 8:51 AM