Rather than diving back into things here with something easy, I decided to try something I haven't done before. While browsing my Google Alerts for Jim Sterling, I had an idea inspired by the awesome troll data analysis done by blogger kirbybits in the wake of the whole dickwolves fiasco. I decided to see how many search results for common misogynist language I could get for major gaming sites. I was curious - is my growing hate for Destructoid simply because of Jim Sterling? Or is it really more misogynist than other major gaming sites?

The first thing I did was draw up a list of sites to search from: Destructoid, Kotaku, Joystiq, Team Liquid, 4chan/v/, Reddit/r/gaming, the official WoW forums, and the official StarCraft II forums. (Unfortunately, I quickly discovered that Kotaku doesn't allow Google searches. I don't know if there's a way around it, but I was feeling too lazy to find out.)

The next thing I did was draw up a list of search terms. I did this mainly using the word maps in kirbybits' troll data analysis. The searches I ran were: slut, whore, fat slut/whore, feminazi, feminist/feminazi bitch, cunt, and rape. For the two word phrases, I searched for both with "or" (eg: "fat slut" OR fat whore"). I had initially planned on including "bitch" as its own search term, but I discovered that bitch by itself was a problematic term because of it's varying uses - it wasn't possible to easily separate the verb from the noun, and so I dropped it from my list.

The results were... well.... not too surprising, but I went to the effort of making them pretty anyway using IBM's ManyEyes. Unfortunately, while ManyEyes makes things pretty, it doesn't make them terribly readable at smaller sizes - so I wound up making ugly charts in Excel. (If you'd like, you can click this link to see the visualization itself.)

Just to amuse myself, I've decided on a tournament style ranking to determine which gaming site "wins" the prize of using the most misogynist language. The "winner" will get three points for each top result, second gets two, third gets one. The site with the highest total "wins". 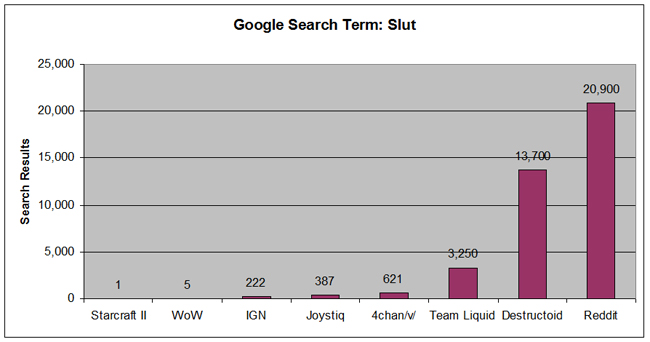 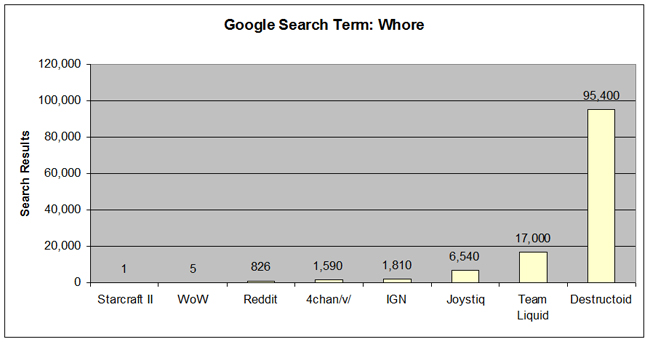 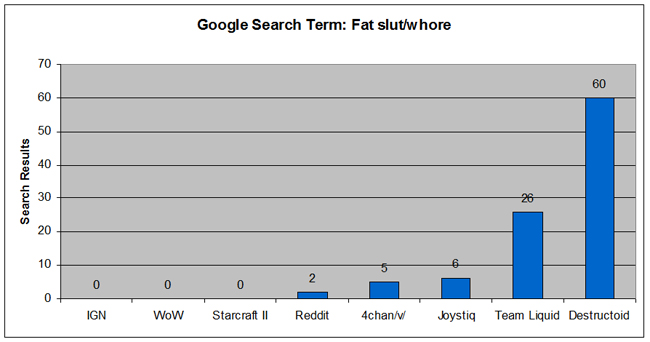 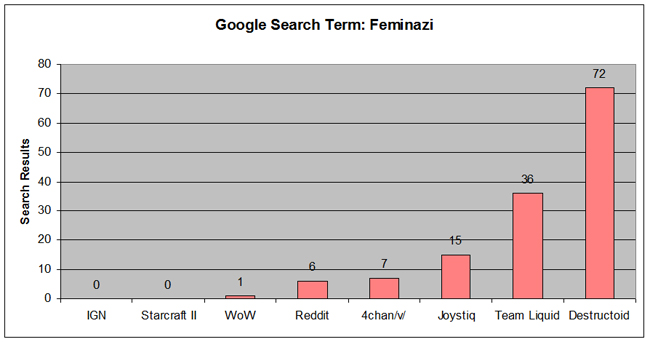 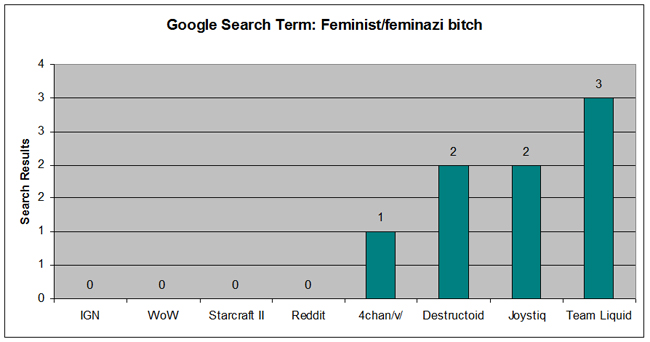 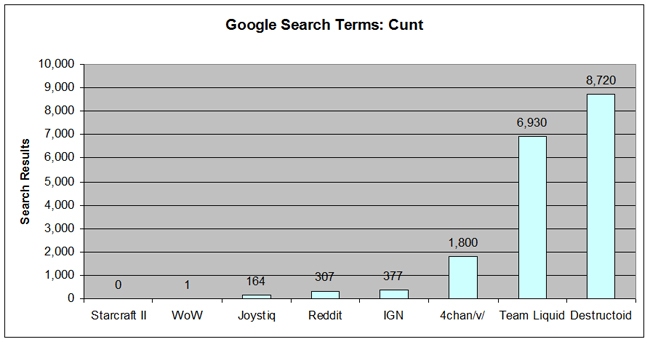 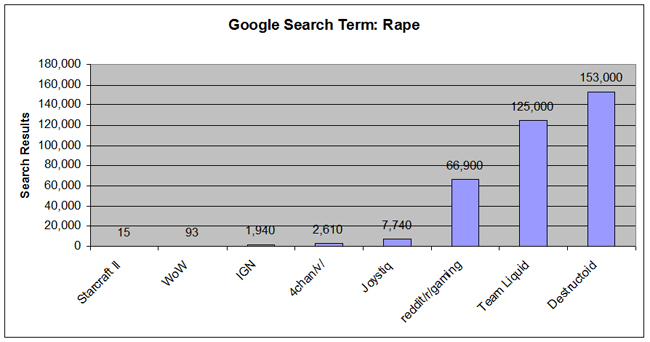 Although Destructoid didn't win every search term, they still managed to completely dominate the competition with a whopping 19 points, winning in five of the seven categories. Team Liquid, though, put in a solid showing as well with a solid 14 points - proving once again that their reputation for sexual harassment has at least some basis in reality. Joystiq managed to come in third with 5 points, just barely edging out Reddit/r/gaming/'s 4 points. And 4chan, a supposed hotbed of anonymous internet fuckwittery, barely even managed to make the list with 1 point. Better luck next time, guys.

Now to be fair, I do imagine the terms feminazi and cunt were edged in Destructoid's favor, given the recent Jim Sterling twitter fiasco in which he called twitter user Daphny a "feminazi cunt" - something for which he received a lot of backlash. But given the huge gulf between Destructoid and its nearest competitors, I feel confident in saying that Destructoid uses the most misogynist language of the group. (Which makes me regret being unable to get search data for Kotaku. Now I really want to know how they compare.)

None of this, of course, considers the context of the usages, so I'll look at that next time.
Posted by wundergeek at 11:53 AM