Industy artist fail: Wayne Reynolds (at least he's not as bad as HTK)

[Preamble and Disclaimer: All of these can be seen at much higher resolution if you click the images. I recommend doing this. And as always, none of this is mine. All of this is copyright Wayne Reynolds and/or whichever company hired him. I don't own a thing!]

I've been meaning to write this post for quite a while now - it just kept getting put off every time I spotted more egregious stuff I wanted to post about. But Wayne Reynolds has long been a pet peeve of mine when it comes to fantasy tabletop art, and I thought it was important to highlight his artwork because he is a huge name within the fantasy art industry. I will certainly be the first to admit that skill-wise, his artistic chops far exceed my own; however, Mr. Reynolds is a perfect example of an artist using his powers for evil.

Now when I say "using his powers for evil", let's be clear. Wayne Reynolds is no HTK. Even if he has a propensity for stupidly cheesecakey women, his cheesecake women are definitely active and strong characters. Also, for the most part the only anatomy distortion that they suffer from is an over-inflation of the breasts, which is also a far cry from HTK's barely-human-looking crotch-thrusting figures.

In a way, that is actually part of my frustration with Wayne. I know that he's capable of producing totally epic, non-sexualized female characters that kick huge amounts of ass when an art director puts their foot down and insists on NO CLEAVAGE WAYNE I MEAN IT. I mean check these women out:

Totally epic, right? Any of these women would be completely badass characters for long-term play. Each of them is strong and has a real sense of character. I mean I've talked about how much I love Seelah (paladin, far right) before here. But sadly, I had to look pretty hard to find these examples. For the most part, Wayne prefers his women looking like this: 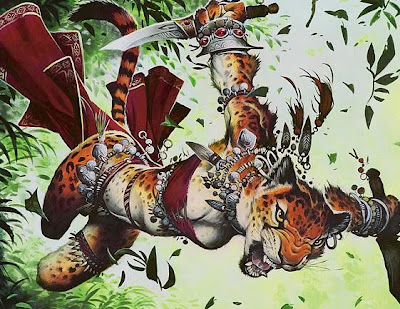 Don't get me wrong. Tiger lady is pretty badass, for sure. But, you know, does she have to have her tiger bits hanging out like that? Now, it wouldn't be so bad if Wayne had a habit of doing equally sexualized illustrations of male characters. I've long said that I wouldn't mind a line that just sexified everyone equally regardless of gender; it might not be to my personal tastes, but I could at least get behind it's existence. And Wayne does occasionally do illustrations of sexy male characters like Seltyiel: 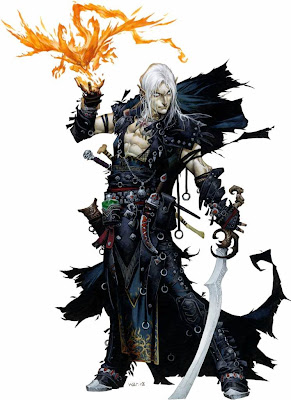 But sadly, Seltyiel is pretty well in the minority for male characters in Wayne's art. Mostly Wayne's men tend to look like this: 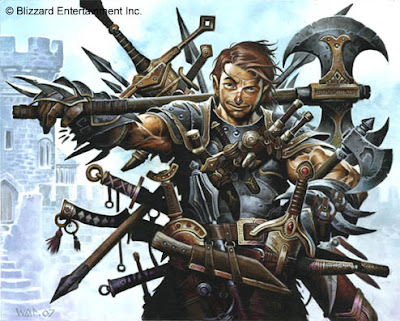 ...covered head to toe in armor and in poses that don't emphasize their sexy bits. (Okay, maybe not with quite that many weapons. I couldn't resist the opportunity for a bit of visual hyperbole...)

Now this isn't exactly new, and it certainly puts Wayne in good company with many other fantasy game artists. The male = fully armored & not sexualized / female = chainmail bikini and heaving bosoms paradigm has been pretty dominant in fantasy game art ever since the creation of D&D. And at least Wayne manages to draw women who look competent while thrusting their scantily clad bosoms out for the rest of the world to see, which is certainly a far cry from women in cages.

Still, it's pretty discouraging when Paizo hires Wayne to design their iconic sorceress and he comes up with this: 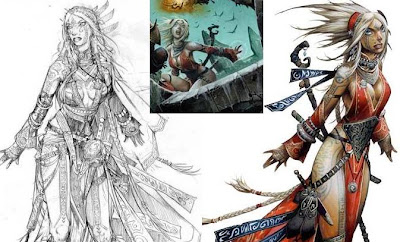 Wow! How distinctive from every other female mage ever! A gorgeous woman with big fake boobs and not enough clothing. I mean, come on - she's practically walking fanservice. Unless she's using body glue to hold that top in place, there's no way that top is going to confine those ta-tas once she starts dodging arrows. But then again, I suppose she could use sorcery to the same effect? Still, it seems like a waste of a spell slot... 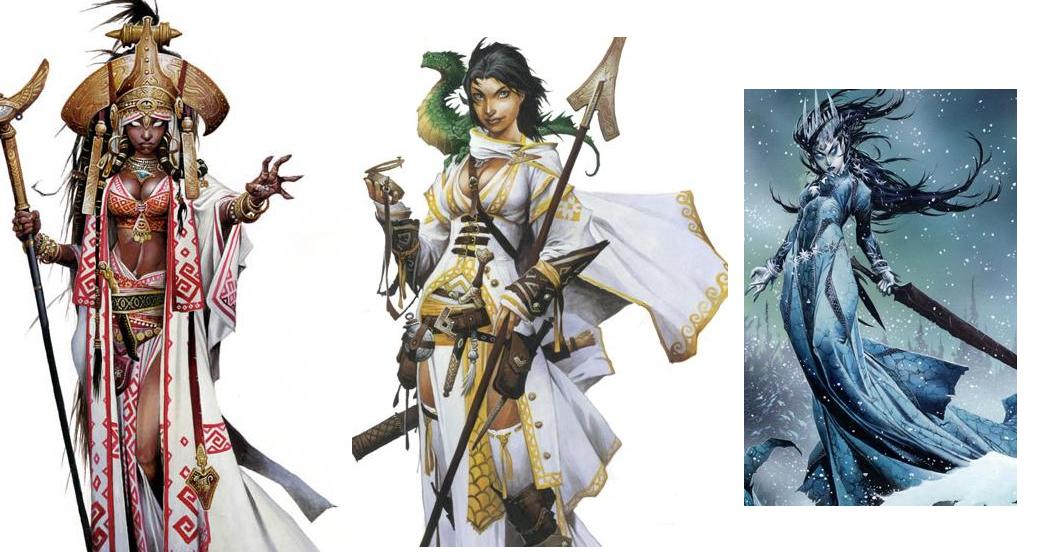 The trap that fantasy women fall into is that if all women are mages and all mages show their tits, then clearly all women show their tits! And Wayne certainly isn't doing much to dispel that notion either. But then I think that stuff like this:

...makes Wayne's opinions on the importance of breasts in fantasy art pretty clear. Sure, none of these women are in cages, but it doesn't exactly feel very progressive to say "sure women can be adventurers" when the clear parenthetical is "as long as they show us (male gamers) their tits".

And most of these aren't even NICE tits, which is kind of bizarre given the fact that these figures are otherwise pretty undistorted. (They're all Barbie, sure, but not too distorted.) All of these women have bizarrely inflated sphere boobs that in some cases aren't even that appealing. I mean, the gnome and the hook fighter especially have boobs that just kind of freak me out - it looks like someone taped melons to their chests. How is that in any way appealing?

The only one of these women that I in any way appreciate is the fire mage; her chest is actually quite small. Still, body paint =/ clothing and gee it would be great if she HAD SOME DAMN CLOTHES.

The ones that make me the most frustrated though are the ones where the art direction was pretty obviously for a strong, FULLY-COVERED female character and Wayne gave them cleavage anyway: 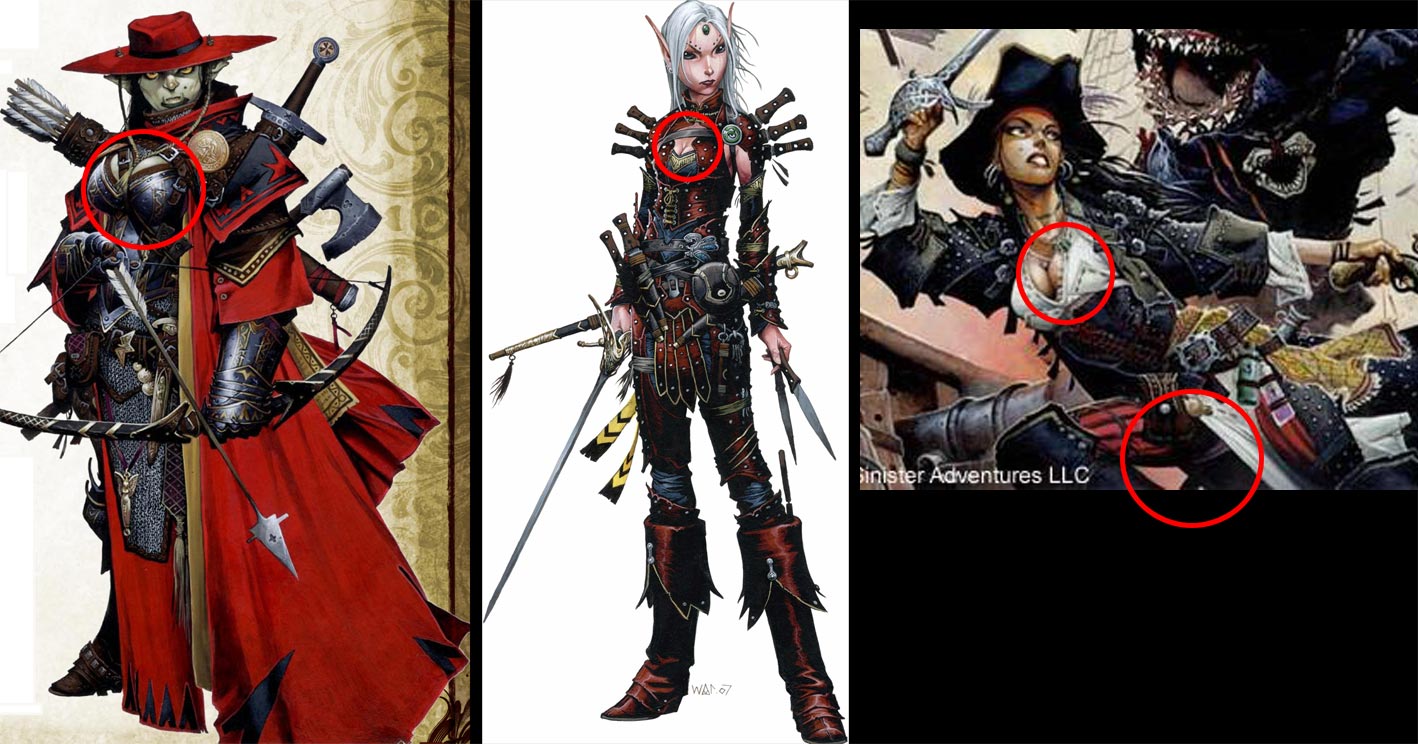 I mean, Christ, Wayne. Looking at these, I hate to think of what initial drafts of Seelah might have looked like. Did you honestly think that people wouldn't notice the random cleavage? It's especially frustrating on these characters because they come SO CLOSE to being every bit as awesome as the first set and then fall flat on her face. Is there ANY reason for us to see Imrijka's (far left) hugely inflated sphere boobs? No. Does being able to see Merisiel's (middle) tits somehow make her a better, more compelling avatar? No. Does being able to see the pirate's tits AND panties make us more able to believe in her strength? Um... no.

The worst part is that I can so clearly see what these characters could have been had they not been gratuitously sexualized. Please - can't we allow strong female characters to be strong AND female and not have to show their tits to the world? Why do we have to do this? Why do we have to continue to tell women that they can only expect to be strong and competent so long as they agree to dress for the titillation of their male counterparts?

Fuck that. I want women who are badass and not sexualized: 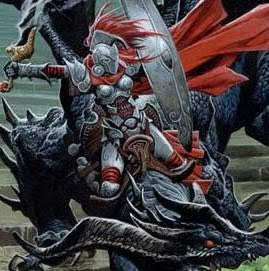 So how about it, Wayne? You're clearly able. Now are you willing?
Posted by wundergeek at 12:15 PM