On the word slut: a rambling response long overdue

Okay. A quick summary before I dive into what is sure to be a long and rambling post of where this is coming from. Maverynthia and tekanji left some comments taking issue with my use of the word slut in a recent post. I was on vacation at the time, but didn't want to announce that to the interwebs; instead I wrote some super-quick (less than five minutes) and admittedly defensive comments. Tekanji responded with some comments... that Blogger's spam filter promptly ate.

I didn't catch this until much, much later (again, vacation) after she'd already written a post on Shrub.com. I restored the comments and made a clarifying post, apologies were made by all and sundry for the misunderstanding, and I promised to write the response that I wanted to write several days ago and was too braindead to do until today.

Okay. That about covers everything for our readers who weren't following things across three different threads on two different blogs. So, to jump right into it...

Okay. So in my post about TERA Online, the word slut was used in the title: "TERA: competing with Bayonetta for the sluttiest women still wearing clothes?"

The second (chronologically) instance was in my post about gamer valentines:

I'm actually going to talk about the second instance first, since I think it needs to be addressed before I can come back to the first.

Slut the second: All female heroes are not sluts

Okay. When I started this blog, I started it in a fit of rage about all of this bullshit I'd collected about sexism in gaming while doing research about my original article over on See Page XX. I was all angry and used language that was a lot more extreme than what I use when writing posts now. I know in the past I have referred to women in images as I've examined as "cleavagey skanks" and "slut-bags". And you know what, once I settled into a routine and started getting desensitized (at least to a certain extent) to this shit that I examine on a regular basis, I re-thought my stance somewhat. I backed off on language like "skank" and "slut-bag", though I continued to use the word "slut". 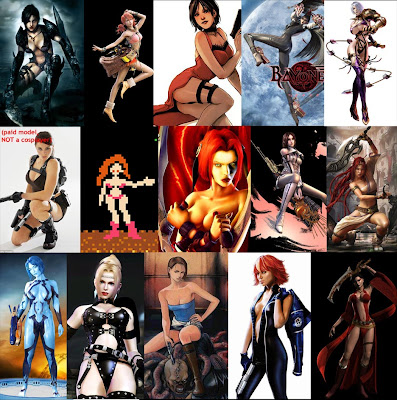 But wait! That's hypocritical, isn't it? Please allow me to explain...

Here's the thing. I wish I had better language to describe these things, language that isn't loaded. But the fact remains that English is not a perfect language, and sexism is pretty hard-coded. Gender neutral insults like "asshole" are almost always less "extreme" than gendered insults like "douchebag", "cunt", or "bitch". (You could make arguments on either side for most variations on "fuck____", but that's a different argument.)

Similarly, saying that these women are "scantily clad" or calling their clothes "skimpy" doesn't really do justice to how extreme the designs of these characters are. It goes beyond just the cut of their clothing - it extends to anatomy and posing as well. Often video game women have their secondary sex characteristics distorted in ways obviously meant to titillate the intended viewer (straight men). However, would I say that all of the women in the above image are sluts? No.

Here's the thing. Slut is a loaded word with a lot of baggage, but I feel like it can be an accurate word to use when used to describe the outfits and armor worn by fictional women in gaming, because often that harmful baggage is exactly the stereotypes that the character designers want to convey to their intended male audience! The awful slut stereotype is exactly what the game companies are using to sell their product to male gamers!

Was I sloppy in my use of the word by saying "traditionally slutty female heroines"? Absolutely. But because of the fact that companies use the baggage of the slut stereotype to make money, I feel it's important to understand that the word slut does have a place in the deconstruction of character design, as long as one is careful to use the word in reference to the design and not the character herself. At the end of the day, fictional gaming women do NOT have a choice about how they present themselves to the world, and I think that's an important thing to consider. But that lack of choice still doesn't make them sluts.

I can respect that slut can come with a lot of painful and terribly personal baggage, and absolutely not do I want to condone the real-world verbal abuse of women by men who call them sluts and other similar insults. But the slut stereotype is a very real part of what I'm trying to confront here, and I hope that what I've said makes sense as a case for the considered use of the word.

Should I have been more careful? Sure. And for that I apologize.

The women in TERA are noted for their problematic animations. The castanic (demon) women run around bent over at the waist so that you can see up their skirts (if you can actually find one). What's worse, the idle combat animation looks like it wouldn't be out of place on the floor of a club and the actual spell casting animations involve hip thrusting gyrations.

That's not to say that real women who want to dress like castanic women and go dancing should be called sluts! But again, when you consider the animations in combination with the designs, the promo material, and the entire conversation surrounding TERA Online, again the word slut does seem to apply to some extent since the harmful baggage is again intended as promotion. The creators behind TERA Online are very purposefully aiming to make their designs more sexist than any other comparable game while still not crossing the line into "adult" like Kabod Online. (Though the fact that these characters are avatars makes me think that I should have said that the castanic women ACT slutty rather than saying they ARE sluts.) 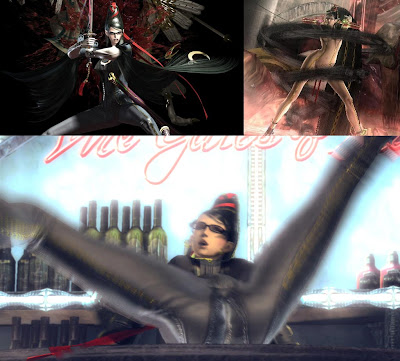 These are all screenshots, sadly.
Now it's super rare that you have an example as extreme as Bayonetta, sure. But that extreme exists. Bayonetta is the literal embodiment of almost every negative stereotype about women's sexuality that exists in Western culture, with a healthy dose of Japanese stereotypes thrown in. I honestly don't know how to talk about a figure like Bayonetta without saying that she has been explicitly created to perpetuate slut stereotypes.

But, to state the obvious, that doesn't make all fictional game women Bayonetta - thank god. There exists a spectrum, and a lot of the time the lines aren't as clear cut as they are with Bayonetta. The vast majority of fictional women aren't sluts, and it was sloppy of me to use language that implied that I thought they were. But I stand by the title of my post about TERA, because there is a mentality among certain game designers that in order to attract attention you have to be MORE sexist than anyone else out there because vanilla misogyny isn't cutting it anymore.

I've done a lot of soul-searching in the last few days and I feel like this is a position I can stand by. It's a messy position, sure, but sexism and misogyny are messy issues. I'm bound to screw up from time to time, but I don't want to let that fear of screwing up silence me. That said, I understand it if you don't agree with me and am happy to continue having a conversation about it. And if you decide that my views on the matter make my blog not worth your time, I'll understand that too.
Posted by wundergeek at 4:06 PM