WTF: the "not enough hours in the day" edition

Okay, folks. Sorry for the radio silence. (I've been trying to check in with the comment threads since things have been pretty busy...) I got a MASSIVE video-editing project with a crazily short deadline dumped in my lap, and it's consuming almost every waking moment of my existence. Literally. 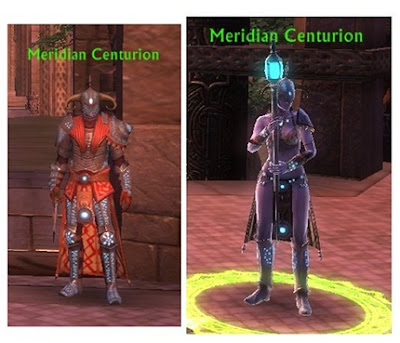 (images taken from this post from Spinksville)
So it seems like a lot of the new MMOs are feeling threatened by TERAs effort to have the least-clothed women in MMO Land, because I'm seeing a lot of pornular women that really up the ante from other MMO companies. Case in point, here are male and female guards from the same area in the upcoming MMO Rift. Looks like their uniforms aren't all that... um... uniform.

Someone was kind enough to email me this ad that they spotted for Rappelz. I was intrigued because Rappelz was the very first game I ever lambasted, and this woman is even LESS clothed than the Rappelz women of six months ago! I think I'm going to have to hunt up a bunch of new Rappelz ads and see how they compare to the old ones...

Lastly, I wanted to link to an article about the upcoming Tomb Raider game. A lot of people have lauded the redesign of Lara, but perhaps there is a cause for trepidation. The feature on IGN seemed very enthusiastic about the realistic death animations and describes several ways in which Lara can die, including the gem:

All of which should keep you happy if you enjoy watching bad things happening to pretty ladies.

And this is why female gamers hate IGN. Still, I'm a bit nervous now for how the new and improved Lara will fare. Here's hoping she doesn't meet with the same fate as Samus in Other M.

Thankfully, I have something to get rid of the bad taste...

Last but not least, I'll link to a video that a friend sent me the link to: an episode of Extra Credits by the Escapist about female video game characters. It's long, but it's well worth watching. Also, it makes fun of Other M and Ivy, which I support.


That's it for this week folks. Things will return to normal next week.
Posted by wundergeek at 2:56 PM