Apologetic linkspam: Have some WTF, and also some win

Okay, folks. As promised, here's a bit of extra WTF to carry you through the weekend. I resolve to fail less starting next week, but as I've discovered I need my weekends. Those two days to detox from all the icky shit I look at during the week in the name of research for this blog are important. Srsly. You don't even want to know some of the shit I stumbled across by accident while researching "clothing damage". Brr.

Anyway. Here's some WTF to console yourself with.

WTF the first: yet more creepy shit from Japan

So. There's this thing in Japan called a hostess club, where lonely young men go to spend time with women who are employed by the club, and by spend time I mean just that. Some of them will have board games, others will just have coffee... whatever. Anyhow, I stumbled across this article about a Japanese romance game centering around young women who work at a particular hostess club.

...yeah. Because stalking women home from work is totally romantic.

Anyway. No idea on if it's being translated - these screens are all in Japanese. But here's a taste: 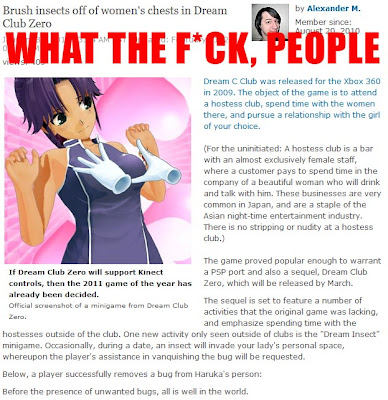 If you want to see more, you can see the full article with lots, and lots, and LOTS of creeptastic screens here. Just don't say I didn't warn you. (And don't get caught reading it at work.)

WTF the second: dear Nukezilla, I heart you

Okay, this isn't so much WTF as an awesome repudiation of WTF. So remember the fail-tastic IGN Gamer Girl Christmas Gift Guide? If you haven't seen it, please do go glance through it. Don't bother reading the text if you're in a hurry - just check out the photos. Go ahead. I'll wait.

... yuck, right? I mean, I'm pretty sure anyone who would attach a photo like this to an article supposedly about gifts for "girl gamers"... 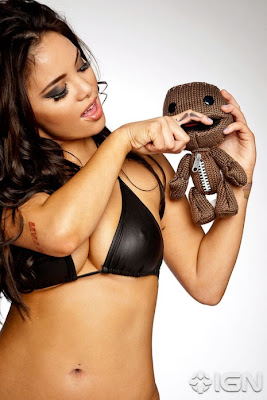 Okay, why is she making Seductive Face at SACKBOY? That's just creeping me out.

...has never really talked to a woman that games. (And yelling 'tits or GTFO' over XBox Live doesn't count, fellas. Neither does sending ASCII penises in chat.)

Anyway. John Kershaw over at NukeZilla wrote this amazing rant about how horrific that feature was. It starts off with "girls, meat, what's the difference?" and gets better from there.

John Kershaw, I don't know you, but you are my new hero.

WTF the third: The Bayonetta creator said something misogynist? NO! SAY IT ISN'T SO!

So everyone is familiar with Bayonetta, right? I have to say that she's hands down one of the best female characters to come out of the gaming industry in the last few years. She's strong, well rounded, not sexualized and... okay even I can't maintain the sarcasm.

Anyway. She's inspired a fair amount of controversy, which isn't too surprising since one of her main attacks involves spreading her impossibly long legs to kill things with her ladybits sword. 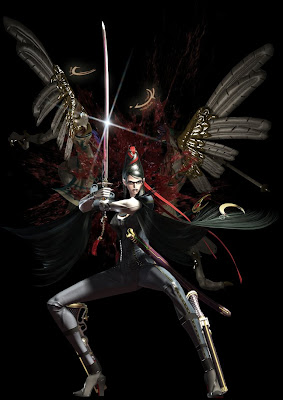 Anyway, Hideki Kamiya - the creator of Bayonetta - apparently thinks that all women view each other as enemies. Which begs the question... He designed a title with a female lead... why?

Blogger Kirbybits got involved in that whole Penny Arcade internets fiasco and got a lot of internet traffic to her blog. Interestingly, she decided to analyze comments to see what sort of trends troll comments display. The results are super-interesting! You can read the post here, but be warned there's lots of super-graphic language involving threats of rape.


And that's all I have time for today. I'll check in a few times this weekend just to make sure people aren't setting themselves (or each other) on fire in the comment threads, but otherwise I'll see you Monday!
Posted by wundergeek at 1:40 PM