WTF: The where the hell did my week go? edition

Holy shit, folks. This week kind of got away from me. I apologize for the radio silence - this week is a week of pure and utter madness. I've also been working on some things that require a bit more research to pull together. Next week, things return to normality, so I'll be returning to a more normal posting schedule.

Some of the stuff you can look forward to is a rant about why Jim Sterling of Destructoid is a despicable human being, a look at recent M:TG art, and, uh... this: 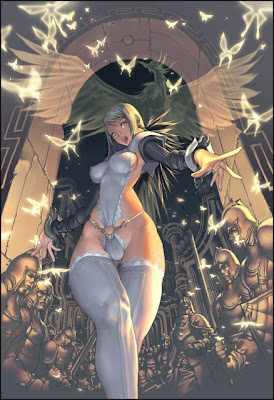 Anyhow, I don't come completely empty-handed. I have some WTF for you, aside from the above.

David Jaffe, the director of the ever female-friendly God of War series, compared the new Sony handheld to a "fresh vagina". Unsurprisingly, game "journalists" have fallen all over themselves to repeat this in the name of "journalism", proving once again that game journalists really are incompetent fuckwits.
WTF the second

I've heard of several "virtual girlfriend" apps for the iPhone, which... okay. Whatever. A lot of them are based on the popular dating sim genre common in Japanese games. But what I really love is when North American men who don't even have a cultural excuse to fall back on wax enthusiastic about these games. Like this review of Virtual Girlfriend in which the title image is captioned:

The beauty is, when she starts getting bitchy, you just start over! 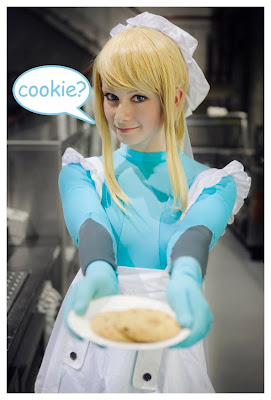 NOOOOOO!!! Samus! What have they done to you?? Curse you, internets! Curse yooooouuuuuu!!!

So. Okay. I want to point out that the file name of this picture is "waifu1". For those of you not familiar with Japanese, that's a Japanese rendering of "wife". There are many things that I can picture Samus doing. Being a housewife is not one of them.

For more housewife Samus fail, check out these photos here.
Posted by wundergeek at 11:27 AM