[Note: It's been a shittastic week, hence the lack of posting. I'll get back to three posts for next week. Meanwhile, I'll try to hammer out a linkspam in addition to this post. Sorry, folks.]

While I wouldn't exactly call clothing damage a hallmark of Japanese/Asian games, it's something that is common enough that (for the most part) it doesn't raise any eyebrows. However, it's not exactly something that's been too common in North American games. Unfortunately, it looks as if that trend may be changing, thanks to games originally made by Asian companies and translated for North American players.

So here for your, um, edification are screens from Kabod Online, Soul Calibur IV: Broken Destiny, and Parasite Eve: the 3rd Birthday. I wanted to confine this post to titles that have gotten more hype than others - but there are certainly smaller titles featuring clothing damage as a key feature that are being translated as well: Ikki Tousen Xross and Queen's Blade: Spiral Chaos are just two that I've stumbled across recently. I'm sure there's more.

Kabod Online is a translated Korean MMO from Kabod Entertainment. As far as fanservice-y models go, they seem to be pretty standard as far as free Asian MMOs go: 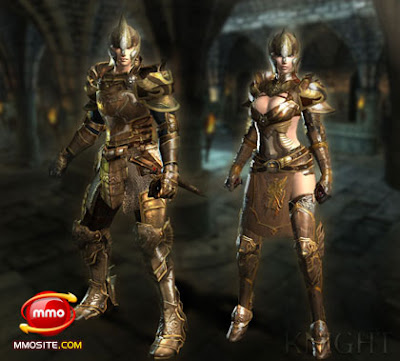 When you go to Kabod's website, there are apparently only three character classes to choose from, with only two specializations for each class - so it doesn't look like there's a whole lot of gameplay diversity. K-MMOs are pretty infamous for not even trying to disguise the treadmill, but this seems perhaps more egregious than most.

But Kabod Entertainment doesn't seem too worried about that. They've got a sure-fire plan. Sell their game with breasts! Only, since that's what ALL of the free Asian MMOs are doing, they had to take it to eleven - hence the introduction of clothing damage. In Kabod, both players and monsters take clothing damage as they engage in combat. There's a base level where clothing/armor is undamaged, a middle level where it's mostly off, and a bottom level where you're in your skivvies and, if the character is female, your gazongas are hanging out: 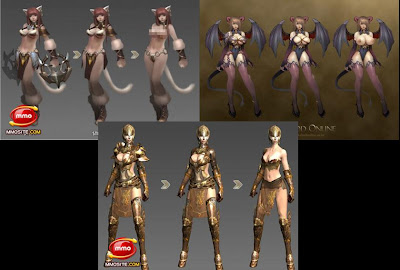 Unsurprisingly, the clothing damage feature is what has gotten the most attention and what Kabod Entertainment has been advertising most heavily. Way to pander to the lowest common denominator guys. From what I read while searching for screenshots, it's pretty common to play a rogue (one of the least clothed classes) and let her get down to mostly naked just so you can ogle her while you play. I mean, check this out:

LEFT: One breast in, one breast out? That's gotta be uncomfortable. RIGHT: Oh god. They modeled ladybits, didn't they? That's just gross. 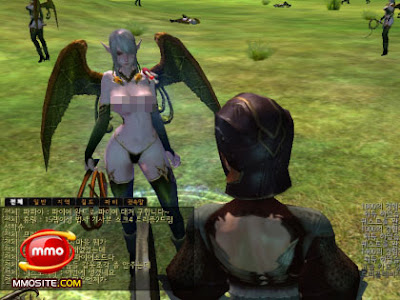 Will this be the game that launches a thousand faps?

The studio behind Soul Calibur is apparently having a competition with Dead or Alive to see who can make the skeeviest game - it's the only explanation I can think of. Soul Calibur IV is getting a PSP release, with the addition of - you guessed it - clothing damage! Because, really, we weren't seeing ENOUGH of these ladies, amirite?

Also, there is a character creator that will not only let you create new characters, but will also let you customize existing characters, in case you're feeling like some of your wimminz are too covered up. 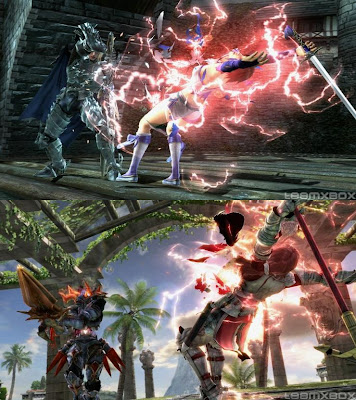 So we have yet another entry in a series of female characters who used to be mildly positive strong characters and who have been turned into walking fapfests designed to please male gamers. Poor Aya. I'm not saying that Aya Brea was ever on the level of Samus, but she's a far cry from Princess Peach!

It should be noted that there was a fair amount of buzz about the fact that the beginning of 3rd Birthday features a shower scene. OMG! Color me excited!

So the shower scene is bad enough, but series creator Nomura decided from the outset that there would be clothing damage in this title, and that Aya would take more damage as her clothing got damaged further. This would make sense if Aya was walking around in plate mail, but since she's wearing just normal clothes, the only possible explanation is "sex sells". So here's the progression that Aya goes through:

Now, Aya can get changes of clothing to cover herself up again by going back to base - but it doesn't really seem like that's a feature that's being heavily encouraged, since Nomura has said in an interview (unfortunately, I can't find the link anymore) that you can get Aya to max clothing damage quickly by dropping a few grenades nearby. "Not that anyone should play that way" - he hastened to add.

Even worse is that the clothing damage is, again, pretty much how they're promoting the game. I mean, check out this promotional art. 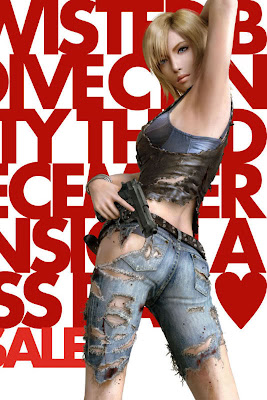 Look at that! Half her ass is just hanging out there! Oh Squeenix. I know that you can be pretty sexist, but why do you have to do shit like this? You want to give me well written female characters with no pants and very little clothing? Fine. I'll roll my eyes and pony up. But this? This is not okay.
Perhaps the most depressing thing of all is that you can switch Aya's costumes. There's a loooong list of options, including a Lightning costume aaaaannnd... 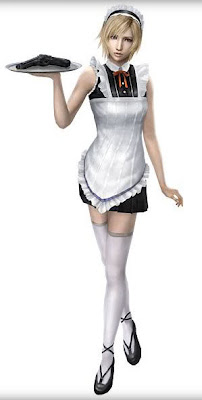 Fetish wear! Because who doesn't want to watch a maid get her clothes torn off while fighting monsters and stuff?

/headdesk
Posted by wundergeek at 10:04 AM