Before I get into today's post, I just want to refer your attention to a very interesting feature by Jonathan Holmes on Destructoid. It's a very excellent look at female characters in video games and the over-used sexy badgirl/chaste goodgirl dichotomy that dominates all video game writing ever. Also, do yourself a favor and watch the video. It's kind of long, but worth it - it's very funny.

I never thought I'd tell people on this blog to go read something on Destructoid, but there you go. I guess anything is possible.

And now for something completely different

A while ago during one of my WTF roundups, I posted a screenshot of a character model wearing nothing but crotch floss: 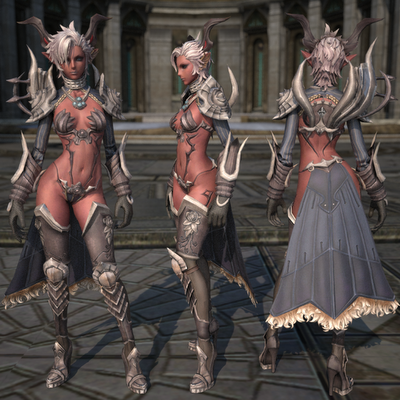 I'd forgotten to include the name of the game in the file name, so at the time I just posted the screenshot as a bit of trivia. My helpful commenters informed me that this was a screen from the upcoming kMMO TERA Online which is being released soon. I filed that information away and promptly forgot it amidst doing research for other posts. That is until someone mentioned TERA to me again and I decided to take a look. Surely anything with character models that tasteless would be totally easy to mock, right?

My expectations were pretty low when I followed a link to the European site for TERA Online. Still, I was pretty shocked when this is what I saw on the main page: 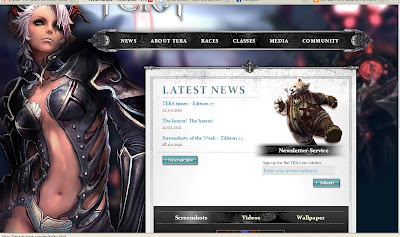 Does that curvy spine remind anyone else of Bayonetta?

Holy crap! I mean. Wow. That's... um. That's a lot of crotch. Like. Right there. On the main page. On second thought, it might be a little silly being surprised about these things, but usually they don't bust out the crotch right on the main page. They save it for screens of the character models on the race and class pages, but it's usually not so... blatant.

I was a bit hesitant as I clicked on the race page to check out the different races and was pretty surprised when the first race page (Amani) featured this image: 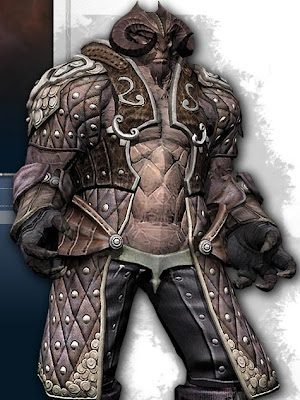 Whoa! That's, um. That's some crotch! Some male crotch! A lot of male crotch! So, okay, maybe this TERA game is just all about crotch. And that wouldn't be so bad, really - as long as it was equal opportunity crotch. Really, that's been my beef all along. If you're going to have tasteless nudity, at least have EQUAL OPPORTUNITY tasteless nudity. But wait, no. It looks like TERA isn't equal opportunity after all: 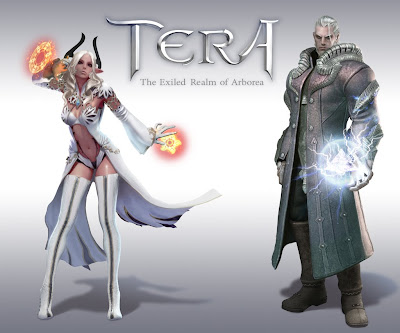 At least she's not taking a dump.

So it looks like just another case of a monstrous male character being suggestively depicted to make some sort of statement about his "monstrousness". Certainly we don't see any of that from our human male, who is also allowed to stand up straight. Unlike the female mage who is sticking out her ass and waving her tits in our faces. Why, oh why, is it that there is not a single female mage in all of MMO-land who is capable of casting spells without gyrations worthy of a pole dancer?

And it gets worse: 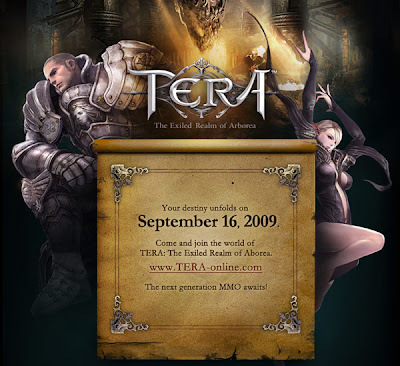 In this image, the clothing dichotomy is even greater! The male character is wearing about fifty pounds of plate mail and the female character is wearing... even less clothing than the last one. Not that this is really anything new. This is the sort of thing you see from pretty much every MMO ever - and not just the free ones. Guild Wars, EverQuest, WoW - they're all just as bad.

And of course, what MMO promo would be complete without... 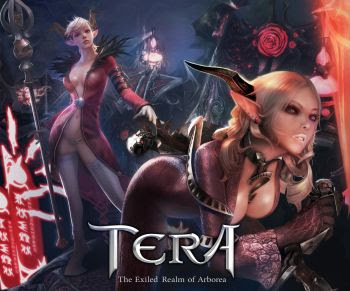 Lesbians! ...okay, they're not actual lesbians, but they're two hot, almost completely naked chicks in blatantly sexual poses. It's very hard for me to think that there's NOT some kind of lesbian subtext intended. Of course, this might be cynicism on my part. Maybe the artist wants the intended male audience to think of banging these chicks in serial instead of in parallel. (Ha. I'm such a nerd.)

The real nail in the coffin is when you start lining up male models and female models. Here for comparison are male and female human models:

The most exposure we see from any of the human males is a very shallow v-neck. Otherwise they're completely covered with multiple layers of clothing and armor, while the ladies are left to shiver with all their bits hanging out. Let's hope they control the thermostat, otherwise they're going to be pretty cold.

The outfit on the far right is the most ridiculous in my book. First of all, the design is actually quite ugly and doesn't really do flattering things to the figure. Second, the other two female humans at least get proper panties while she gets something that barely qualifies as crotch floss. It's practically a crotch decoration. I hope she used some body glue, because I don't see how those are staying on...

And of course, it's not just the humans. The high elves are just as bad:

Okay, maybe not QUITE as bad. The woman on the far right is wearing the most clothing I've seen on a female TERA model so far, which puts her ahead of her counterparts I suppose. Still, I'm getting awful tired of the stripper boots. Is there some kind of stripper boot outlet in the TERA world that causes them to be the most economic form of footwear?

Oh, and let's not forget another important bit of promotion. WHAT DO THEY LOOK LIKE WITHOUT THEIR CLOTHES?? Come on, people. Let's remember the important questions. 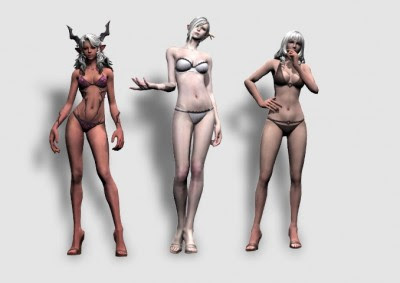 Why is it that in their underwear, their breasts are still more covered than in some of the "armor" sets that I've seen? Ditto for their crotches. What gives? Why is THEIR UNDERWEAR more modest than their actual clothing? Do people not understand how absurd that is? How is anyone supposed to fight anything in clothing that you're about to pop out of at any moment? Seriously, check out these action shots: 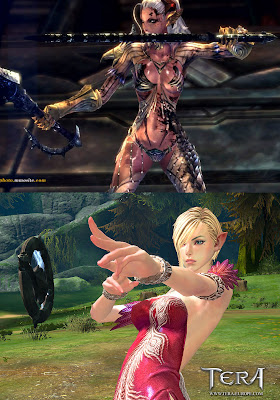 So the woman on top... What the hell is she thinking? Did she seriously think that it was a good idea to go fight monsters dressed like that? "Well, I've taped sea shells to my tits, so I think I've got everything important covered here". Really? This is about as likely as giving a stripper a sword and telling her to go kill some monsters. I'm not terribly likely to believe that someone dressed like that is capable of wielding a sword that large. Plus - WHY IS SHE ALL MOIST? What purpose does that serve besides making her even more fap-worthy? "Well, I don't have any armor, so I'd better grease up before I tackle that monster over there!" Come on, people. Now you're not even trying.

And then from our mage on the bottom, we have more spell casting pole dancing gyrations. Does the magical energy she's summoning come from her ladybits? Because if it doesn't, why is she standing like this?

The sad thing is that all of these screens took me maybe twenty minutes to round up, which means I didn't even have to look all that hard. I'm a little scared of what's out there that I DIDN'T find. Now I'll admit that the graphics are pretty impressive, but you can put lipstick on a pig and it's... still a pig. Graphics do not a good game make. Neither do tits, but tell that to the people eagerly awaiting the North America release of TERA. I guess they disagree.
Posted by wundergeek at 9:09 PM