Yuna: yes I liked X-2. Suck it up and deal. (possible spoiler warning)

I'm having a really shitty day, so I thought that I'd write about something that I liked rather than going off on another rant that I really don't have the mental energy for today. So today, here's a love letter (so to speak) to one of the greatest female characters ever, who - like Lightning - would have been perfect in every way if she'd been wearing pants: 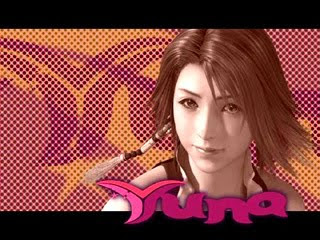 Okay. So enough peaens to Yuna. Just what makes her so awesome? Let's start with the fact that she's a complete and total badass. The first time you meet Yuna, she's tired and sweaty from just having completed a huge ordeal - successfully summoning her first aeon: 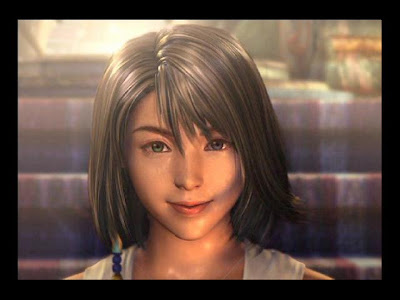 Now that I'm a summoner, I could totally feed you your heart on a plate. Just sayin'.

So right off the bat, Yuna is established as a powerful character. She's no fragile little flower, waiting for a big, strong, manly hero to solve her problems. Aeons are entities of unbelievable power, so being able to call and control them confers with it a certain base level of badassery. I mean, when someone can call something like this to do their bidding:

(Oh, she can also walk on water, bee tee dubs.)

...it pretty much means you shouldn't mess with them.

What I liked even better about Yuna was that she didn't fall into the "powerful weakling" trap that's so common with many female characters in JRPGs. From the outset, Yuna was the leader of the party who had the skills and knowledge to get the job done. Really, Tidus - the protagonist - was just along for the ride. And how great is that? How many times in gaming do you see a female character really, truly in charge? Even the strongest male character, Auron, deferred to Yuna's judgement when they were at odds.

And let's face it, it's not like Yuna's job was all sunshine and puppies. Nope. She was walking a road that ended, as far as she knew, with certain death. What's more, she had to deal with the aftermath of disasters that left hundreds of people dead in their wake, and she was constantly being scrutinized as a public symbol of hope. But Yuna never whined or complained like you'd expect of a more strereotyped character. She did what she had to do. 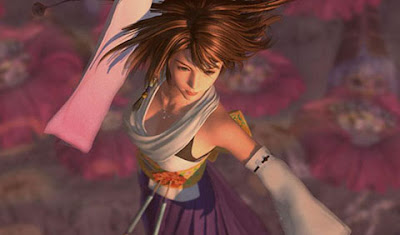 One of the things that I loved most about Yuna was that she was either the saddest happy character or the happiest sad character I've encountered. Both roles are pretty stereotyped - pretty much any JRPG you play will have at least one genki girl. And many JRPGs and anime have stereotyped sad girls (often sad girls in snow). I love the fact that Yuna managed to turn both stereotypes on their head. When Yuna is sad, the player is sad because she's a genuinely endearing character. And when she's happy, it doesn't ring false like it would with a genki girl.

Furthermore, her sadness doesn't detract from her strength or otherwise make her seem like a weaker character. She has her moment of sadness, then she straps on her big girl boots and gets on with what she has to do. Her sadness, rather than being seen as a weakness of character, helps to define her strength because even when she is most sad she doesn't let that sadness control her life. That's powerful stuff. 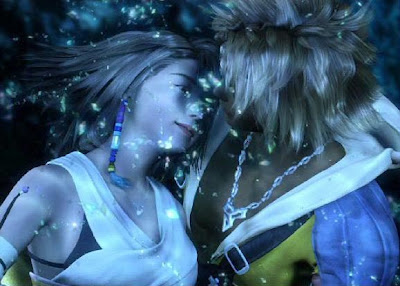 Let's face it. If you found out the person you fell in love with wasn't real, you'd be pretty sad too.

The thing that makes me appreciate it all the more is that Yuna's sadness in X-2 mainly stems from not being able to be with Tidus. And that makes me appreciate her refusal to sit around and mope even more. She's moving forward with her life, not sitting around and being all weepy because of a man. Yuna's shenanigans in X-2 aren't all about saving the day, sometimes they're about having fun, pure and simple. And sure X-2 was full of fluffy "girl power" moments involving Rikku and Paine, but frankly I think that's the sort of thing that gaming needs more of - not less.

In the end, Yuna manages to be a strong, well-rounded character who never loses sight of herself or her ideals. And maybe best of all, she manages to save the day and rescue the prince instead of being the damsel in distress. At the end, Yuna's actions bring Tidus back - which wouldn't have happened if she'd sat around being a sad girl in snow (or in sand, considering that Besaid is pretty tropical.) 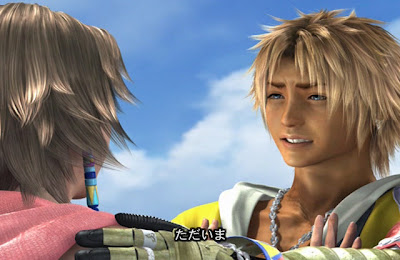 I'm not too proud to admit that I cried.

Now if only more women in games were written as well as Yuna, I'd have a lot less to complain about. ...and okay it would be nice if she was wearing shorts that didn't expose the lower half of her buttocks. Details...