Lightning is awesome. I just wish she was wearing pants.

I know I write a lot here about things that game companies and game artists do wrong, so I thought that maybe I should start doing occasional looks at things done right, or at least things done mostly right. I just finished playing FFXIII a few weeks ago (yeah, I know - I'm a bit late to the party), so I thought I'd take a look at Lightning, since she is now officially one of my favorite female characters evar.

[SPOILER WARNING: There be lots and lots of spoilers]

I've long enjoyed the Final Fantasy series of games because of the excellent writing and because they tend to be a bit more even-handed with the nudity. (Pantlessness is a bit more equal opportunity - just look at characters like Tidus or Kuja...) The more recent games in the series, from about Final Fantasy X onwards, have all had some pretty decent female characters as well. Sure there are some stereotyped characters like Rikku - the genki thief girl - or Lulu - the wise-cracking and sexy mage. But there are some really fantastic female characters - like Payne and Yuna in X(2) or Lightning and Fang in XIII. And even the more stereotyped characters are still engaging and three dimensional.

Lightning is probably one of my favorite female characters in a game I've played in the last couple of years.

I'll admit to totally hating her for the first several hours; at the beginning of the game Lightning is pretty one-dimensional and unsympathetic. She's completely focused on reaching her sister in time to save her, and doesn't much care how her actions affect the people around her. When circumstances throw her in with people less capable of dealing with the chaos and violence that the game opens with, she doesn't try to use her strength to protect those less able to protect themselves. Instead she bluntly tells her future companions to either keep up or get the hell out of her way. Not exactly an endearing introduction. (I'll admit that I said "what a bitch" several times during the first couple hours.)

Still, there was one thing that I appreciated right off the bat. Lightning is portrayed consistently through the game as the strongest character, bar none. Snow might come close to her prowess, as does Fang, but when it comes to engaging the enemy and emerging completely unscathed no one beats my girl Lightning. 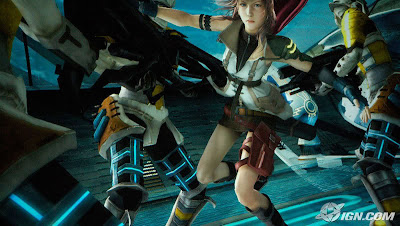 Is that all you got?
Lightning's strength isn't ever questioned - it just is. Even better, no one ever comments that she should be easy prey because she's a woman. Nor does Lightning ever apologize for her strength or try to minimize her abilities to soothe male egos. She knows she's stronger than everyone else, and she enjoys the fact. 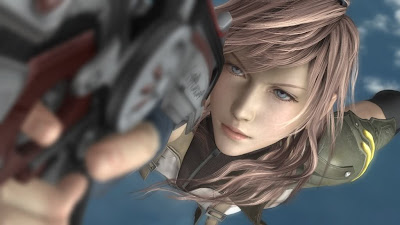 Gotta love that cocky smile.
Now the downside to all of this is that for the first several hours, Lightning does seem almost as if she's been written as a man with boobs. Out to rescue her sister from certain death, a cavalier attitude toward danger and a bold willingness to face danger single-handedly... these are traits we think of being the hallmarks of male heroes. Not to mention that Lightning does have a certain level of machismo...

Eventually, though, Lightning develops from a one-dimensional man with boobs into a sympathetic, engaging female character. The vulnerability beneath the bravado is revealed in glimpses until we get a picture of a woman who has become what she is in an effort to protect what is important to her. And we learn that the rudeness and unsympathetic behavior she exhibits at the beginning of the game are because she is consumed with guilt at failing at what she sees as her duty - to keep her sister safe. This is the kind of wonderful complex backstory that female characters almost never get. Here is a hyper-competent female character with complex motives and emotionally engaging goals who is allowed to be what she is without anyone ever second-guessing her because of her gender!

Eventually, as is inevitable in any game in the Final Fantasy series, Lightning forms close bonds with her companions and comes to value their safety just as much as her desire to free her sister from imprisonment by the Fal'Cie. 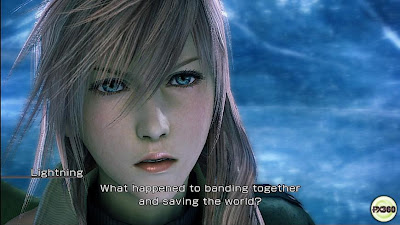 What really made me happy about the relationships she develops with the other party members is that Lightning is allowed to be a character without a love interest. She treats Hope as a younger, more vulnerable version of herself - responding to the fact that he has lost his mother just as she lost her parents, and repeatedly assumes the role of his protector and mentor. With Sazh, she shares the bond of experience and a certain world-weariness. 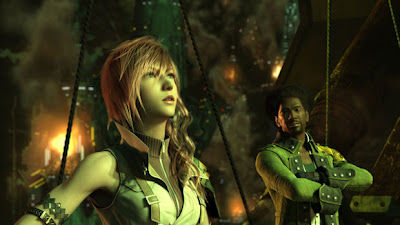 Incidentally, I was also very glad that Sazh wasn't just another Wise Cracking Black Man. Thank you for resisting the urge to make him comic relief, Squeenix.
And Lightning's initial antipathy for Snow deepens into a complex friendship between two very opposite personalities without ever once veering into romantic territory - despite the expectation for a romance between two of your party members. This makes her all that much more unique - how many strong and well-rounded female characters can you think of that don't have a romance arc?

By the end of the game, I was completely love with Lightning as a character. She wavers in the beginning, but once she finds the path that she needs to walk she doesn't falter in her resolve. She is strong without being unsympathetic, has complex and engaging relationships with her companions, and she becomes a source of strength to her companions.

At the end, I found myself crying just as much because of the touching reunion between Lightning and Serah as because of the bittersweet nature of Fang and Vanille's sacrifice. 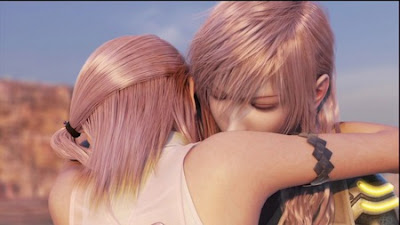 Lightning's reunion with Serah
The final scene made me so very happy. Lightning doesn't try to hide her feelings as she might have at the beginning of the game - she's allowed to be both strong and sensitive and emotionally vulnerable.

The only thing.... the oooooooonly thing... I wish that Lightning was wearing pants. She's such a wonderful, otherwise completely unsexualized character that from certain camera angles her lack of pants just felt really jarring - especially since all of the male characters (for once) were completely covered by contrast. She's such a well-rounded and positive character that I wish that I could whole-heartedly embrace her as a universally positive character. As it is, my eyeroll is a very minimal one, and I very much hope that Lightning continues to be as well written in the upcoming FFXIII-2!