In my last post, I picked out some images from the re-launched galleries to illustrate why numbers can be misleading and why it's important to consider the content and context of images when you're looking at them. This time we're going to look at images that clearly depict characters of a specific class to see how women are often portrayed differently than men as archetypes of a given class.

They say an image is worth a thousand words. To me, this picture speaks volumes: 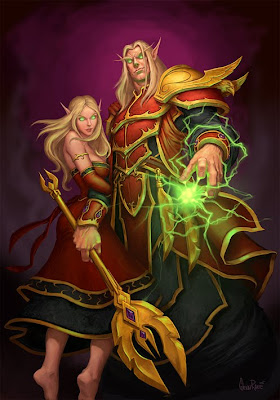 So, okay, on the surface we don't have anything that we haven't seen before. We've got fully clad dude mage next to scantily clad lady mage. Of course she's got big breasts, and of course they're just about popping out of her top. Whatever. What bothers me most is not how she's dressed, but how she's clinging on to this big strong man as he stands there with a cocky expression, ready to cast a spell. Yet another example of the attitude that if you need someone to go on an adventure in Azeroth, you'd better find a man. 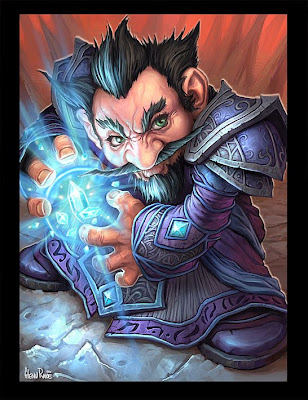 Pretty standard mage, right? Long robes, fully covered, looking dramatic while preparing to cast a spell... Nothing we all haven't seen many times before. Now compare this with, oh, every picture ever of female mages:

I shit you not, every single picture in the Classes gallery that is tagged as mage and depicts a female has ridiculous cleavage, even when it's in somewhat questionable taste. These are all of the boobs, I mean, female mages you'll see in the Classes gallery. The boobs on the top right are undead boobs, which is gross. And the boobs in the bottom middle are gnome boobs, which is even grosser. I mean, seriously - please don't sexualize gnomes of either sex ever. Yuck.

Warlocks seem to fare a little better in their depictions, even if they wind up contorted into unnatural poses to emphasis their, uh, attributes. But overall, these two women just aren't as compelling as the male warlock. According to the lore, warlocks are supposed to be mages who've gone bad. They make pacts with demons for crying out loud! When I look at the male warlock, he looks dangerous and maybe disturbed. The women, well, they kind of look pretty while waving their hands around.

And really, that's a problem with a lot of the class artwork. So many of the male class images show male figures doing stuff dramatically while the female class images just show figures posing prettily. Like...

So, yay that the female priest is actually covered and doesn't have ridiculous boob-holes or thigh-slits or body paint masquerading as clothing. But look at these two images next to each other. The priest on the right looks like he is about five seconds from seriously messing up your day. The priest on the left is just posed against a neutral background, almost like she's part of some weird Azerothian photo shoot.

Again, the usual dichotomy of clothed (men) versus not (woman). And again you have examples of men in dynamic poses while the woman is in a static pose. The male hunters have their bows drawn and are about to actually fire at something. The female hunter is standing in a neutral pose with her hips cocked, which makes the figure softer and less threatening.

Also, while her arrow is on fire, her bow is not drawn and the arrow is pointed at the ground. And like our female priest, she is depicted on a flat grey background. With all of the many and varied landscapes that Azeroth has to offer, the artist couldn't think of one to put her in? Not one? Hell, plunk her in the Barrens if you're feeling lazy. Or Tanaris, or the salt flats in Thousand Needles. Something! But no, again our female class depiction is just another model posing for the camera. 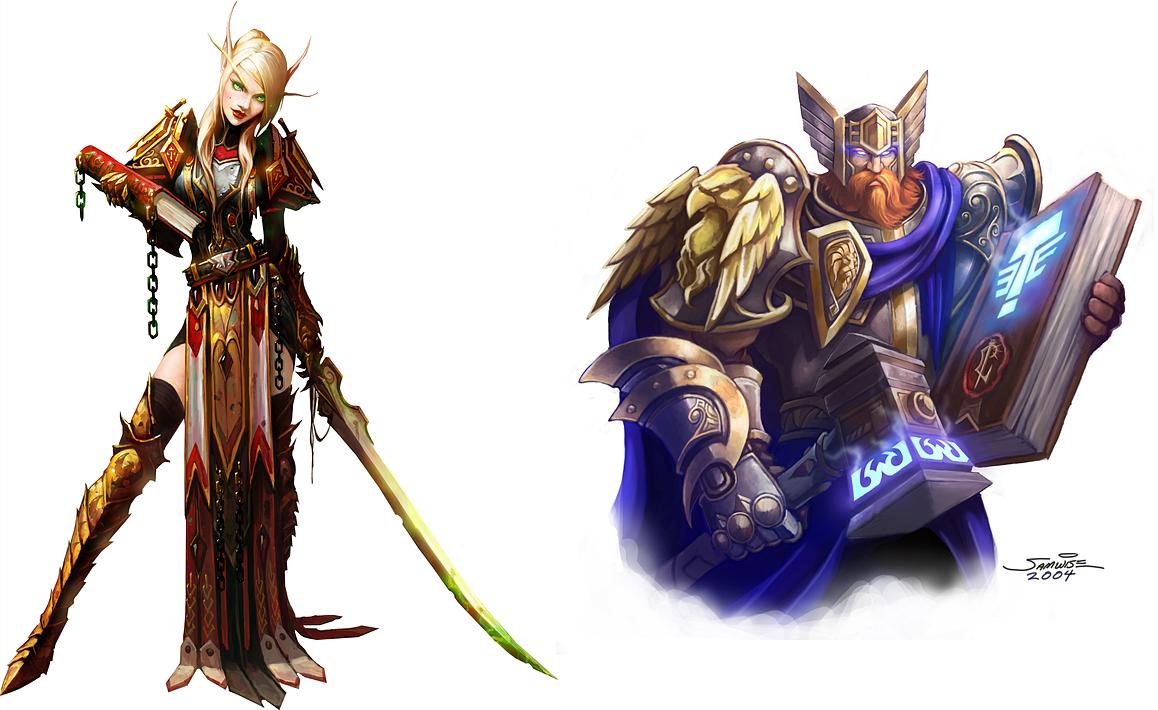 Even when both of the figures are in neutral poses, there's still a marked difference between male and female depictions. It's impressive how many points of divergence there are when both illustrations clearly started with the same idea. There's the obvious difference of armor: the male paladin is wearing about fifty pounds of plate mail while female paladin is wearing spandex with armored shoulders and boots. (Why don't female paladins ever get to be hulking walls of glowy metal, huh?) But again, posing is almost the more important difference.

Everything about the female paladin is designed to be alluring. She stands with her hips cocked and her head tilted. The expression on her face is seductive, with a coy smile and half-lidded eyes that are supposed to be inviting. Her sword is unsheathed, but is not held ready and is positioned so as to further emphasize the exaggerated stance she is in.

The male paladin is everything that we'd expect to see in a paladin. His pose is erect, his shoulders and hips are squared. He looks at the viewer with a solemn expression, and while he does not look as if he about to attack, his weapon is still at the ready. Everything about this character conveys strength and power, while the female figure conveys only softness and sexual invitation.

Of course, even when the female figures are depicted as active, often they are hyper-sexualized as well (see above mage boobs). Sometimes this can be of the mildly bothersome variety (OMG! She's so cool! If only I couldn't see her tits!):

Sometimes it only makes me want to facepalm:

And sometimes it makes me want to scream and hit things very hard:

So, okay. We have the complete lack of clothing. We have the pose - arched back with outthrust boobs. We have the perspective, which emphasizes the size of the boobs. And we have the angle, which makes her look as if she is thrusting her ladybits right at the viewer. The sum total of all these elements reads something like: I KILL THINGS WITH MY LADYBITS. Or something like that anyway.

All of which brings me back to the point I made at the beginning of this post. Male adventurers in Azeroth get to do important things, while female adventurers just get to stand around and look pretty. But maybe I'm getting bent out of shape over nothing. Trolls, orcs, and night elves don't exist right? This is all "just fantasy" after all.