As promised, I have another gender-swap to finish out this series of WoW posts. My first attempt at a gender-swap was reasonably successful, but I discovered that a lot of the sexualization gets lost in translation since the "collection of bits" phenomenon has to be unbelievably exaggerated in order to come across on a male figure.

The ladybit assassin (see part 3) was almost my choice, but I was afraid that people have been so desensitized to Conan-type beefcake that it wouldn't have the impact I was looking for. So instead, I went for my second, uh, favorite: 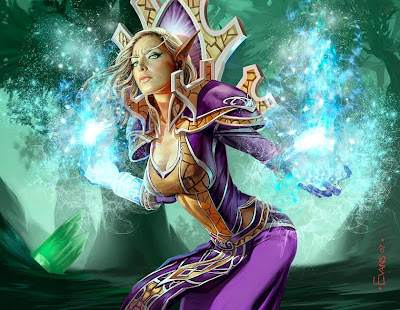 God. This makes me want to facepalm every time I see it.
And here is my take, what I have dubbed a work of "mancake": 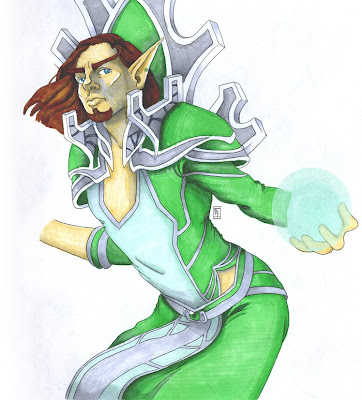 I got lazy and didn't bother reproducing the bad PhotoShop filter frost magic effects. Also, I changed the colors and simplified the design of the robes. That was out of copyright concerns, not laziness.

This time, I was every bit as successful as I had hoped. This time, the sheer ridiculousness of the pose and costume wasn't lost in translation, even after correcting the anatomy to give my gender-swapped mage a rib cage.

We have the usual suspects when it comes to sexualized female figures. Her costume has both a cleavage AND a midriff window. Anatomy is similarly distorted in the usual fashion. Ginormous fake boobs? Check. Lack of rib cage? Check. Impossibly flat abs? Check. But honestly, that's not what I was after.

The most obvious object of ridicule is the pose. Her back is arched with her breasts and ass being thrust out at the same time. I'm really not sure how she's supposed to cast magic like that; I tried to get into that pose myself and it was all I could do to not fall over or accidentally injure my back. (Give it a try when no one's looking. It's pretty hard.)

So I'm pretty pleased that most of that still comes through with my gender-swapped version. I'm not positive that the cleavage window has the same effect, even with him thrusting his chest forward. Without actual cleavage I suspect some of the impact is lost. But the intent still comes through loud and clear, which makes me very happy indeed.

Now to be fair, a fair number of the comments in the WoW gallery revolve around how it looks like she's about to take a crap. But there's just as many comments about how "real" this looks - which kind of freaks me out that nobody notices basic shit like WHERE ARE HER ORGANS? And then there's an even scarier subset of people who, predictably, find Crapping Frost Mage hot:

Oh, internet. I'm finding it harder to be surprised by this stuff anymore.

Anyhow. I'll definitely do more of these in the future (though perhaps not right away since my time is at a premium for the next few weeks). I had way too much fun doing this one!
Posted by wundergeek at 9:52 AM