(As such, I’ll note that all of the images used here are official Blizzard artwork; the fanart gallery was not counted, and nor do I use any images from the fanart gallery in these posts. While Blizzard is choosing which fanart submissions to post on their site, they themselves did not commission the artwork, nor did they pay for it – so I decided to err on the side of caution.)

Why the numbers aren’t as positive as they seem

All of these were counted as suggestive male figures. The left-most figure is classified as suggestive male figure because he has a discernable gender (male) and isn’t wearing a shirt. Now, we can argue about whether or not it’s reasonable for some people to find giant bipedal cows sexy, but I feel a little more confident in saying that it’s definitely ridiculous for someone to find an insect sexy. (But who knows, perhaps that’s just my arachnophobia talking.)

The middle figure is also a pretty silly inclusion. This cartoonish goblin is in no way presented as a “sexy” figure, but his lack of pants automatically included him in the suggestive category. The orc on the right is the only figure with even a semi-legitimate claim to actual sexiness. A case could be made for him being a sexualized figure. But I could also put together a pretty good case for him not being sexualized, so I’ll settle for calling the running orc an edge case.

The blood elf paladin seems to be wearing spandex instead of the impossibly huge plate armor that male paladin characters usually get to wear. Furthermore, her costume has two conveniently placed straps that call attention to her breasts, since they hang right where her nipples would be.

The rogue fares a bit better in terms of costume in that it looks like actual armor and not just spandex. However, it’s every bit as tight as the blood elf paladin’s outfit, and she has the ridiculously sexualized pose to boot! Her pose has her arching her back while simultaneously thrusting out both her breasts and her ass. It’s pretty clear that she’s on display for the male viewer.

As for the two undead… During my counts, I didn’t count any undead as suggestive since they’re – you know – dead. But when you look at these undead women, they reflect what you see when you look at almost all art of female undead. Both women are pretty seriously rotten, and yet somehow their faces show no trace of rot.

Furthermore, neither do their breasts – which are still large and improbably perky given the state of the rest of them. Are women in Azeroth too poor to afford a full embalming, so they just get their face and tits done? “Well, I might be dead, but at least I’ll still have a great rack!”. Give me a break. These women are dead, and yet they’re still being designed to appeal to male viewers.

As for the last two, calling the warlock not suggestively attired is pretty ridiculous since I can discern anatomical features not normally visible through clothing. (If I can see individual ribs, she might as well not be wearing clothing at all.) The priest’s robes are pretty tight too, though not as tight as the warlock. However, there’s clearly visible underboob through the robe, and the cross is pretty clearly only there to call attention to her breasts.

Not all suggestive depictions are created equal 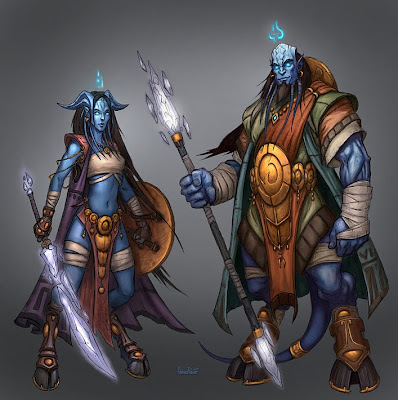 I’m not going to try to figure out whether the suggestive monstrous figures that were counted were meant to appeal to women. But I am going to say that there is a world of difference between this:

These women are being presented as sexual objects in a way that just isn’t true for the majority, if not all, of the suggestive male figures. Every single of one of these women is drawn to be nothing more than a collection of sexy parts, presented for maximum titillation. I mean, I think this image says it all: 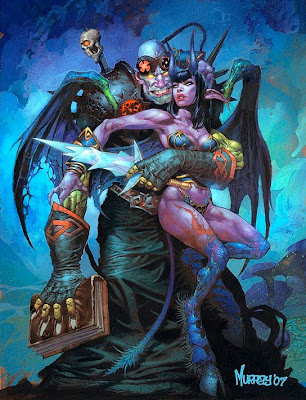 By the numbers, the new gallery shows an improvement in all measureable sexist trends except for depictions of class archetypes. But looking at the images tells a different story. Even if Blizzard were to start counting the numbers of male and female figures in their illustrations and making a conscious effort to have men and women equally represented, it wouldn’t change the underlying attitude that women in Azeroth exist to be sexually pleasing to men.