Why I am arrogant, crazy, ugly, and not worth listening to

I'm discovering that trackback links are a mixed blessing. Sometimes you find super-interesting stuff as a result. And sometimes you find out that a couple dozen people are slamming you over on reddit. I'm mostly getting the hang of not taking the attacks personally, because it's not really ME that they're attacking, if that makes any sense.

Anyhow, one of the gems I discovered in the trackback links was a podcast called the Dungeon Master's Round Table - their most recent podcast links to this blog in the show notes and featured the first half as a discussion of sexism in gaming. Curious, I fired up the podcast only to find out that the discussion was prompted by the fact that one of the contributors (Jerry) had seen my blog and tweeted that clearly I must be ugly. Because I'm a feminist, or something. I got a laugh out of that and kept listening, hoping to hear some good conversation since the host was pretty clearly upset by that tweet.

Unfortunately, what I heard was pretty much what I expected - a bunch of gaming dudes being defensive and coming up with reasons why no one should listen to me. The first portion is about half an hour, so I'll spare you from listening and pick out the highlights. For clarity, if I use elipses in the middle of a sentence, it's to remove things like "uhm, ah" that are just verbal filler. I otherwise tried to limit myself to quoting only complete sentences. I've also added some things in brackets to the quotes, just to make clear the context of the comments.

In their words (with my responses)

right now they [Blizzard] have a marketing strategy that works, so calling them out is kind of ridiculous

I haven't read her website, so you know, I'm talking completely blind about this... She is, from what I understand... telling everybody else why this morality that she's assigned exists for them too, which it doesn't...

You know, I really admire their ability to know what I was saying without ever actually reading what I had written. Saying that I'm trying to dictate a universal morality based on seeing at an article, that you didn't read, that happened to have charts that you also didn't read... That would be about as sane as if I flipped through an issue of Time Magazine, saw a picture of Barack Obama, and started bitching about how Time was telling me what to think about black people. (In other words, not very.)

This is a fantasy world where I want to play, and the reality is I like chicks with big boobs and very little clothing. I'll admit that. Maybe I'm a pig. (Another contributor, interrupting: "You are a pig.") Yeah, I am. That's fine.

Yeah! Hear that, chicks? That's fine! How dare us wimminz have the nerve to complain about unequal treatment? We're failing to consider something far more important! This male gamer likes boobs! I mean, come on! Case closed, slam dunk, let's move on.

[Here Jerry - the dude who initially tweeted about me clearly being ugly - speaks. He starts off by apologizing for his comment on twitter.] Her ideas I completely agree with. [Long rambling monologue about how he was raised by women and shouldn't be misogynist and how because he's married he's seen some estrogen-filled chick flicks and enjoyed them and then starts talking about Sex in the City 2 and how ridiculous it was. Apologies if I'm not summarizing accurately.]

...Sex in the City 2 or this woman's blog where you take the bullet train to Too Much Fucking Time on Your Hands We Get It Town and it gets ridiculous. Like, I understand her point but...

"Okay, look. I said something that was out of line and I apologize. Here's a bunch of reasons why I have anti-sexist cred and why I agree with your ideas. Now that we've established that, could you please just shut up and not talk about them?"

So why do I think that if this dude would get serious backlash if he started saying things like: "Like, oh my god Haiti. We get that you're poor and all your shit was destroyed and you have lots of corruption and stuff, but can you please take this money and SHUT UP? We're kind of tired of seeing you on the news. It's been a year, move on with your lives."

...but since I'm just a woman, it's okay to tell me to just SHUT UP AND MOVE ON ALREADY.

She has a clear agenda, that is true ... Looking at most feminist writings, its clear that there is an agenda there.

Oh my god, they're on to me! I want to make the same amount of money as my male counterparts, equal representation in government and corporate board rooms, and I want people to stop blaming rape victims for being raped. I'm a crazy fucking radical who has to be stopped! Quick! Somebody put a stop to me before I have a chance to do more damage!

Jerry, don't beat yourself up. I understand where you were coming from with your comment. I think it was a reactionary comment... [Jerry agrees that it was] ...if you felt like you needed to apologize, that's fine. But you could also tell the world to eff themselves too.

Yeah! She's just some bitchy feminist, so who cares if you hurt her feelings? Boo fucking hoo. Go cry me a river and go back to writing love letters to Gloria Steinem!

[Jerry - twitter guy - again] Oh, by the way, my wife... has the capacity to really hate men, but she's been able to spend some time with this blog today and she thinks she's [meaning me, not his wife] maybe a little crazy. So, that makes me feel good because my feminist wife thinks that maybe the blog lady is a little out in left field.

Congratulations! You've found one woman who agrees with you! Clearly that invalidates everything I am saying! Sexism only exists if ALL WOMEN EVERYWHERE say it does.

[about art on Blizzard's site] ...the fanart is more racy than the official art because they're pretty classy folks for the most part... 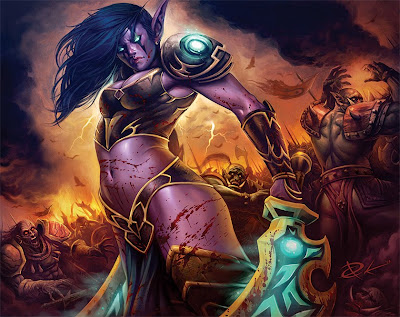 She seems like someone who plays WoW too much and has too much time to bitch about things.

Make up your minds, guys. EITHER I have too much time to bitch about things, OR I play WoW too much. It can't be both, because if I play WoW too much, then I don't have time to bitch about things and vice versa. C'mon. If you're going to find reasons to dismiss me, at least don't make statements that logically contradict themselves in the same sentence.

[The host] This woman makes some good points, however crazy she must be.

I'm glad one of you agrees with me. I would have appreciated you calling your friends on their bullshit rather than taking the easy way out and throwing me to the wolves, but I guess that would be asking you to feel uncomfortable. So, on second thought, never mind. It's easier for everyone involved if we all agree that I'm crazy.

The feminist point of view for me as a guy is when they come out and say all men are pigs and all men like this and that...

Oh, shucks! I have to admit, there's nothing I love more than man-hating and gender-reductionism! Guilty!

Not every feminist is a feminazi

Consensus: Did they Godwin themselves? I'm inclined to say yes, but I'm open to other opinions.

I hate to say it, but I may come to this chick's site just to see awesome pictures

... I can't come up with a response that isn't a proofless insult. However, I suspect the ridiculousness of this statement is its own counter-argument.

So, Jerry, it would be inappropriate at this time to say that your wife is hot?

Yes. Jerry's wife is hot while I am clearly a shambling, drooling horror. (Remember, feminist = ugly.) Pretty wins the day!

[Soon after this they changed the subject and started talking about D&D at GenCon.]

I held off commenting until I'd listened to the whole conversation. Even then I debated with myself for a bit on whether I should comment at all. I decided to err on the side of stupidity (read: commenting), mostly because the host really did seem earnest in his desire to address the issue of sexism in gaming. I may not like the fact that he caved in the face of a unified resistant front from the other contributors and called me crazy, but I do appreciate the fact that I think he at least was attempting to have a productive conversation.

And that's the thing. As much as I appreciate my dedicated readers, you're kind of the choir. I enjoy preaching to you, but sometimes it doesn't feel productive. It's guys like the host that I want to reach out to, guys who maybe don't agree with me but who are still willing to listen to what I have to say without dismissing it out of hand.

As such, I made the effort to keep my comment vitriol-free. (It's still snarky, but I felt a little entitled after being insulted for half an hour. Not terribly mature, I know, I know.) Here's the comment I left:

Hi. I’m the crazy ugly feminazi with too much time on my hands who writes Go Make Me A Sandwich. I feel compelled to assert a few things, since I couldn’t exactly defend myself. First, I have a Bachelor of Fine Arts, which is a five-year honors program and gives me an excellent grounding in art history and theory. Secondly, I have worked as a freelance illustrator in the rpg industry. I won’t make any assertions as to my hotness or my mental health.

If you’d be interested in doing a followup show and actually talking TO me instead of ABOUT me, I’d be game. My contact info can be found through my blog, which I hope you would read more in-depth before addressing my credentials, appearance, politics, mental health, or my radical “agenda”.

So I guess we'll see what happens. Should be amusing. Just one more thing.

[Edit: The host did contact me through email and has been pretty apologetic about the whole affair. We'll see where it goes from here, but I'm cautiously optimistic for a positive outcome.]
Posted by wundergeek at 8:38 AM